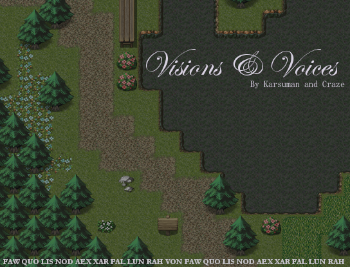 They said I'd die. They said I'd die and go to heaven.
But no - that was not enough for me. I didn't want to die. I wanted to live. In my fear of death, I lost sight of myself and everything I held dear. I made the wrong choice and everyone but me paid the price. But now, with all the things I have learned...I would make things right again. I would correct my mistake and return everything to the way it was before. Dear God...I no longer expect to enter heaven's pearly gates. But please, let me ask for one last favor, one final prayer, if You will.
Advertisement:
Ten days, God. Let my body hold out for just ten more days, so I can redeem myself...

The game is largely non-linear, and is based on a ten-day time limit. It can be downloaded here.

(In addition, a currently in-progress remake of the game can be found here.

You play as the Wanderer, an enigmatic figure who has come to the Montfort village to solve a mystery; apparently, most of the inhabitants disappeared overnight. He decides to explore the village in search of clues, soon discovering an Apocalyptic Log of sorts by a "prophet who has fallen from grace". Shortly after, he realizes that reality is warping around him. Disturbing things appear out of nowhere, other, more familiar things disappear, and all the while, time is ticking away...

"The Book, Dear God. I pray that you have the Book. Otherwise, my dear friend... I am lost. You are lost. We are all lost."