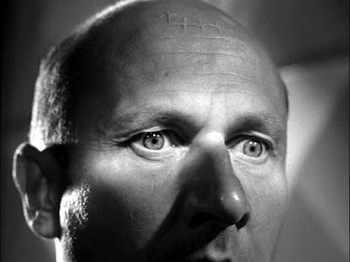 Harold's eyes glow as he summons his mental power. 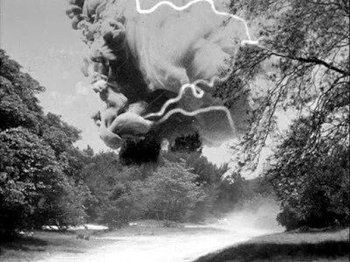 The unintended result of that power.
The Control Voice: In the course of centuries, Man has devoured the Earth itself. The Machine Age has dried up the seas of oil. Industry has consumed the heartlands of coal. The Atomic Age has plundered the rare elements — uranium, cobalt, plutonium — leaving behind worthless deposits of lead and ashes. Starvation is at hand. Only here, in the void of space, is there a new source of atomic power. Above us, in the debris of the solar system, in the meteorites and asteroids, are the materials needed to drive the reactors. Yet in their distant, silent orbits, these chunks of matter are beyond the reach of man, beyond the reach of human hands—but not beyond the reach of human minds. Driving along a country road in an ordinary car is a modest man: Harold J. Finley, quiet and profound…

Harold J. Finley (Donald Pleasence) is a mild-mannered college professor on the surface, but after having a brain operation, every time he's angry a stormy cloud emerges and zaps his enemies whether he wants it to or not. For a considerable length of time, he's not even aware it's happening.

The Control Voice: Deep beyond the kindest, gentlest soul may lurk violent thoughts, deadly wishes. Someday Man will learn to cope with the monsters of the mind. Then, and only then, when the human mind is truly in control of itself, can we begin to utilize the great and hidden powers of the universe.

The Tropes With the Power: