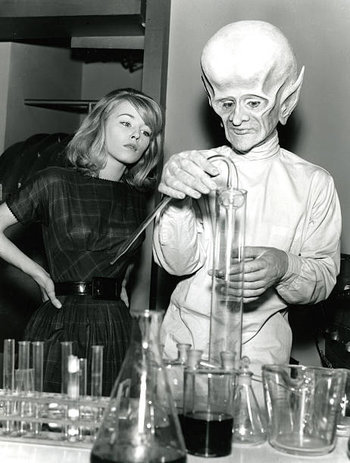 Cathy observes an experimenting Gwyllm in this publicity photo.
The Control Voice: Where are we going? Life, the timeless, mysterious gift, is still evolving. What wonders, or terrors, does evolution hold in store for us in the next 10,000 years? In a million? In six million? Perhaps the answer lies in this old house in this old and misty valley ...

The Control Voice: An experiment too soon, too swift. And yet may we not still hope to discover a method by which within one generation, the whole human race could be rendered intelligent, beyond hatred, or revenge, or the desire for power? Is that not, after all, the ultimate goal of evolution?