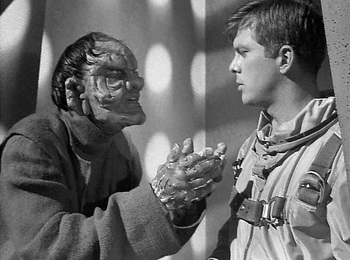 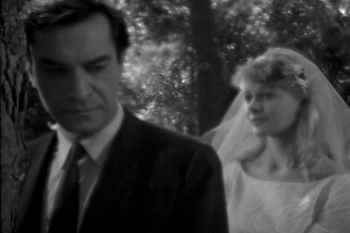 "Andrew" with Noelle.
The Control Voice: Here, in the bright, clustered loneliness of the billion, billion stars, loneliness can be an exciting, voluntary thing, unlike the loneliness Man suffers on Earth. Here, deep in the starry nowhere, a man can be as one with space and time; preoccupied, yet not indifferent; anxious and yet at peace. His name is Joseph Reardon. He is, in this present year, thirty years old. This is the first time he has made this journey alone…

A mutant (Martin Landau) travels from the 22nd century to the 20th century to prevent his bad future.

The Control Voice: It is said that if you move a single pebble on the beach, you set up a different pattern, and everything in the world is changed. It can also be said that love can change the future, if it is deep enough, true enough, and selfless enough. It can prevent a war, prohibit a plague, keep the whole world… whole.

The Tropes Who Were Never Born: