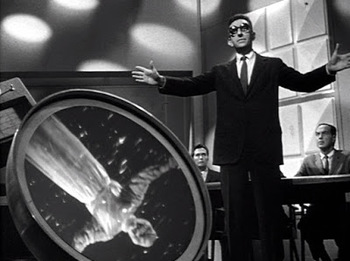 The disguised Lomax speechifies after O.B.I.T. reveals his true appearance.
The Control Voice: In this room, twenty four hours a day, seven days a week, security personnel at the Defense Department's Cypress Hills Research Center keep constant watch on its scientists through O.B.I.T., a mysterious electronic device whose very existence was carefully kept from the public at large. And so it would have remained but for the facts you are about to witness…

An ultra-tech surveillance machine creates an atmosphere of paranoia at a research installation.

The Control Voice: Agents of the Justice Department are rounding up the machines now. But these machines, these inventions of another planet, have been cunningly conceived to prey on our most mortal weakness. In the last analysis, dear friends, whether O.B.I.T. lives up to its name or not will depend on you.