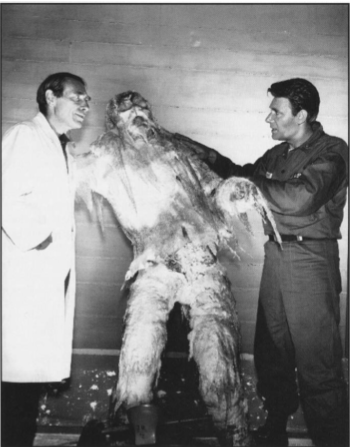 A publicity photo of Gary Merrill and Harry Guardino with "Chill Charlie", the monster created for this episode but never used. 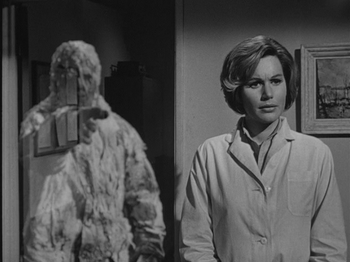 In the finished episode, the ghost of Private Gordon materializes besides Ingrid.
The Control Voice: In northern Greenland, the mountains stand like a wall along Victoria Channel, whose straight course marks the line of the great Baffin Fault. Until recently, not even the Eskimos ventured into this arctic waste; but, today, as in other lonely places of the world, the land is dominated by those instruments of detection which stand as a grim reminder of Man's fear of Man. This is Point TABU, a name given this predominantly underground base by a young officer who explained that the letters in TABU stood for 'Total Abandonment of Better Understanding'. Some 200 men and a few women make this their permanent residence. Their task is to maintain a constant alert against enemy attack, and be prepared to respond to it, devastatingly....

An experiment gone wrong causes a psychiatrist and his patient, a paranoid major who wants to destroy the base located in Greenland, to switch bodies.

The Control Voice: A weapon? No, only an instrument: neither good nor evil, until men put it to use. And then, like so many of Man's inventions, it can be used either to save lives or destroy them, to make men sane or to drive them mad, to increase human understanding or to betray it. But it will be men who make the choice. By itself, the instrument is nothing until you add the human factor.