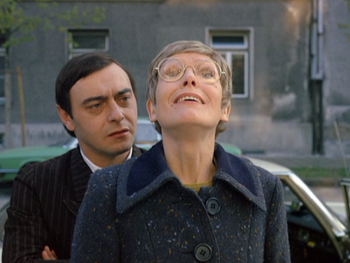 The talent and his admirer
Advertisement:

Satansbraten (in German, "Satan's Brew") is a 1976 film by Rainer Werner Fassbinder.

It is dedicated to the life of the damned poet, Walter Kranz, who is besieged by life. He cannot write any poems and he desperately needs money. He also has troubles with his numerous women.