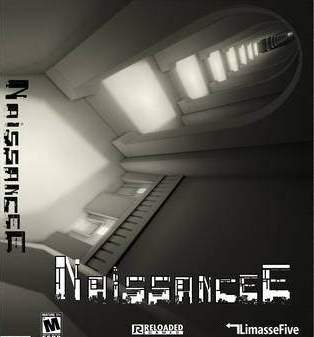 NaissanceE is a first-person exploration and puzzle video game produced by French developer Limasse Five and released in 2014. In the prologue, its protagonist, Lucy, is chased down a long corridor by something. As brief glimpses of this glitchy beast appear, Lucy is forced down a hole by the creature and into an unknown landscape filled with Malevolent Architecture and a growing sense of dread. The player's only goal is to continually explore this world as they try to make heads or tails on how to get out of this strange place.
Advertisement:

The game relies on platforming, and has a breathing mechanic: as Lucy sprints, the player needs to control her breathing to continue sprinting. This encourages the player to keep a rhythm in an otherwise safe environment, to survive the puzzles.

Released on Steam, the game was at first a small pet-project to use architecture that was alive, as its schtick. After a few years, it was re-created in UDK and is now available on Steam.

Tropes to explore in NaissanceE: