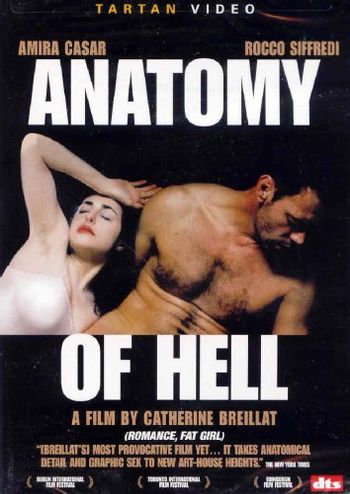 Anatomy of Hell (Anatomie de l'enfer) is a 2004 French arthouse film directed by Catherine Breillat, based on her novel Pornocratie. It's Euroshlock at its finest.

The Man takes The Woman to have her wounds bound. They take a walk, during which The Woman goes down on The Man and claims that all men hate women. She invites him to visit her at her house for the next four nights to prove this hypothesis. He agrees. The next night he comes, and she strips, lies on the bed and displays herself to him, to prove the revulsion that men have for the female form. Cue the baffling philosophical narration and buckets of squick. The two then have sex. The Man then goes down to the bar and grumbles a bit to another patron, then comes back up and pushes The Woman off a cliff. Scene.