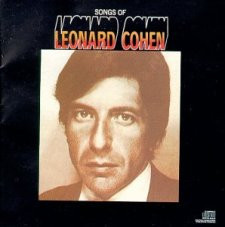 "We are so small between the stars, so large against the sky..."
"For now I need your hidden love
I'm cold as a new razor blade
You left when I told you I was curious
I never said that I was brave"
— So Long, Marianne
Advertisement:

Songs of Leonard Cohen is the debut album by Leonard Cohen, released in 1967. Cohen was already established as a published poet; his first book of poetry, Let Us Compare Mythologies, was published in 1956, eleven years before Songs of Leonard Cohen. He was persuaded by Judy Collins, amongst others, to set some of his poems to music. Collins had already adapted and recorded Cohen's poem "Suzanne Takes You Down", from his 1966 collection Parasites Of Heaven, as "Suzanne" for her 1966 album In My Life, and the song kicks off this album.Songs of Leonard Cohen set the tone for much of Cohen's career; the songs are predominantly melancholy and deal with parting, depression, self-harm and suicide, but also feature interwoven themes of sex, religion and politics with a dry and self-effacing wit and intelligent, profound lyrics. It also established a pattern of being much more popular in Europe than in his native North America.

Three of the songs in this album were used as the musical accompaniment for Robert Altman's McCabe & Mrs. Miller: "The Stranger Song", "Sisters of Mercy", and "Winter Lady".