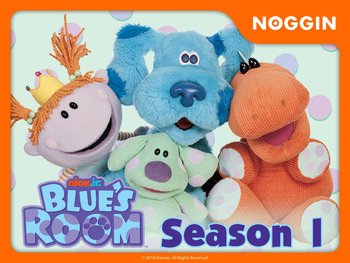 Blue's Room is a live-action/puppetry spin-off of the long-running Blue's Clues. It started as a short segment in the final season of the original show.

The show focuses on Blue, who visits her special playroom where she has the ability to talk. In every episode, Blue invites the viewer on a special themed playdate with music, games and activities.

Some of Blue's playroom friends include:

The show lasted for only seventeen episodes across two seasons from 2004-2007. The whole series could be found on the Noggin app at one point and is currently streaming on Paramount+.