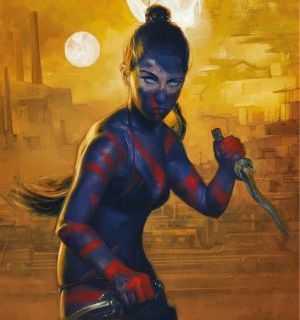 The story centres on Kayla Reinumon, a gladiator on a backwater planet who is asked (not very politely) to participate in the titular Empress Game. The fight determines who marries the heir to the Sakien Empire's throne, and although it's supposed to be a princesses-only event, one particular aspirant to the throne lacks combat skills and wants Kayla to secretly take her place. Kayla is motivated by a secret about her past that she wants to keep: she's already a princess anyway, having survived the massacre of her family when the empire conquered her homeworld. Accepting the deal provides a convenient escape from those looking for her, but at the same time, plunging into the heart of imperial politics isn't exactly free of problems. She has to keep her secret from her new "allies" (some of whom, as it happens, were involved in the aforementioned massacre), while also dealing with the traitor who sold her homeworld to the empire in the first place, who has his own interest in her. And then there's the little matter of winning the Empress Game itself.