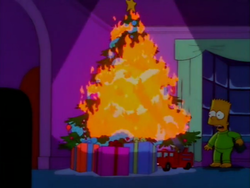 In this (rather bleak) Christmas Episode, Bart accidentally destroys the family's Christmas presents and blames the disaster on a burglar, resulting in the rest of the town opening its hearts and wallets for them, but when Santa's Little Helper finds the melted wreckage and Bart confesses that he lied, the town turns on The Simpsons and shuns them.