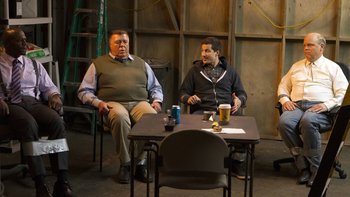 The moment when Jake realizes he Didn't Think This Through.

Holt tells the squad that he has a case involving a celebrity and tasks Terry to assign the case to an available detective. Jake eagerly begs to be able to take the case but Terry firmly tells him "no" and to focus on a marijuana arrest instead while assigning Boyle to handle the celebrity. Hoping to be able to wrest the case out of Boyle's hands, Jake dumps his marijuana case on Hitchcock and Scully. Unfortunately for all those involved, the marijuana case turns out to be much bigger than anticipated and Jake and Terry have to scramble to save Hitchcock and Scully from their own idiocy.

The celebrity case turns out to involve the theft of a valuable oboe from John William Weichselbraun, 1st chair oboist with the New York Symphony Orchestra. Boyle's task becomes all the more difficult when it turns out that Holt is a big fan of the oboist; the normally stoic captain can't hide his giddiness at meeting someone he admires and Boyle finds it impossible to do any actual investigation.

Meanwhile, Amy tries to get Rosa to participate in a blood drive. Upon learning that Rosa is afraid of needles, Amy decides that she, Rosa, and Gina should band together and confront each of their phobias. For Amy: Claustrophobia. For Rosa: Trypanophobia (fear of needles). For Gina: the fear of businessmen.