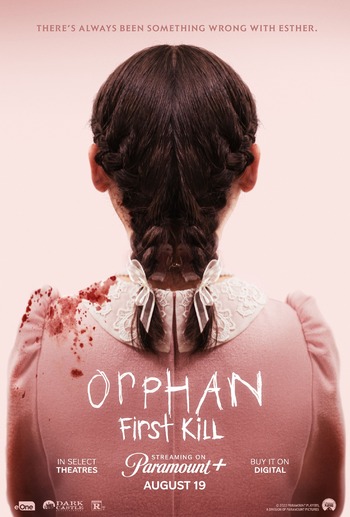 "Everyone expects Esther to be broken. What they really want is a happy ending."
"Every artist needs a space to let their inner weirdo out. We get to see beauty and passion where others don't even know to look."
— Allen Albright
Advertisement:

The film follows a younger Esther (Fuhrman) as she poses as the missing daughter of a wealthy American family (Stiles and Sutherland) after escaping the Saarne Institute and emigrating from Estonia to America. However something unexpected arrives, leading to Esther being on edge with the matriarch of the family, Tricia.

The film got a three-way release in theaters, on digital, and Paramount+ on August 19, 2022.

"After all, who wouldn't want to adopt her?"