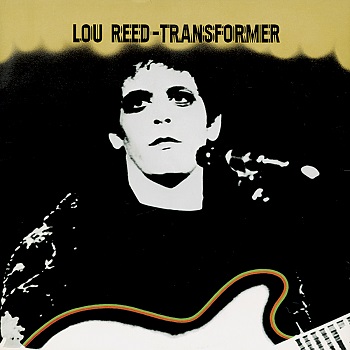 "Oh, it's such a perfect day / I'm glad I spent it with you..."
"The Original..."
—Tagline from the album's advertising campaign.
Advertisement:

Transformer is the second studio album by Lou Reed, released in 1972. David Bowie assisted him as producer and providing vocal and instrumental aid to certain songs.

Transformer also contains Reed's best known hit songs, including "Walk on the Wild Side", "Satellite of Love", and "Perfect Day".

A documentary about the creative process behind the making of this album can be seen in the Classic Albums TV documentary series. It was followed by the much darker Berlin.

Has nothing to do with alien robots that turn into cars.

Take A Walk On The Tropin' Side: