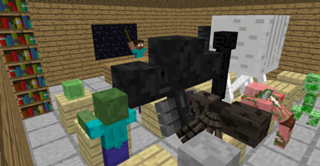 Not your average school.

and eventually fostered by various other channels.

The series revolves around Minecraft mob students being taught how to be a monster. The teacher is none other than Herobrine himself.

The first episode, Crafting, was uploaded on December 11, 2012, which instantly gained popularity, and gave Willcraft's channel recognition.Jailbreak, etc)However, after Bus Trip, Willcraft has stopped creating Monster School. For now. Soon other channels created animations based on Monster School, such as Platabush.

In serious need of some Wiki Magic Love.