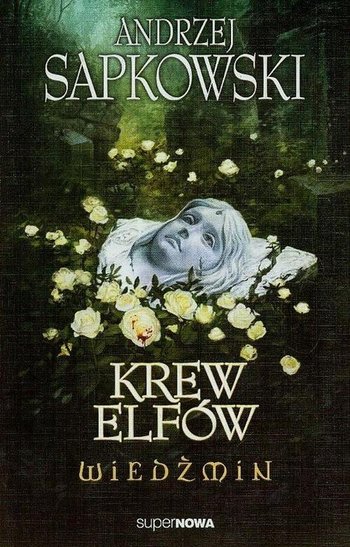 The third book in The Witcher franchisenote Rather confusingly, it's often treated as the first book in The Witcher series—this is the third book, but the first two are short story collections, while this one kicks off an arc of five full-length novels. Not to imply those first two story collections are purely episodic—they very much contribute to the Myth Arc. by Andrzej Sapkowski, originally in Polish but translated to English. It is the first full-size novel in the series, as well as the first installment of the "Blood of the Elves Saga"/"Geralt and Ciri Saga".
Advertisement:

After the kingdom of Cintra was razed by The Empire of Nilfgaard in the previous book, the orphaned Cintran princess Cirilla is picked up by Geralt, her destined guardian. Safe at the witchers' stronghold Kaer Morhen, she receives combat training from the witchers. However, Ciri turns out to be even less ordinary.

The witchers call upon the sorceress Triss Merigold for help, who soon realises the cause of the problem: Ciri is a latent magician, a Source. As such, she has to be tutored by someone more competent — like Yennefer, Geralt's former lover. Meanwhile, prophecies linking Ciri to unimaginable destruction come to light, causing kings, spies, and magicians alike to seek her out.