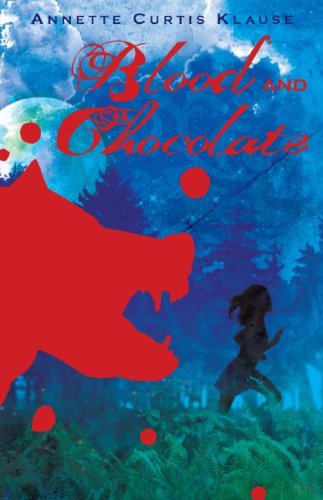 I will howl for you, human boy, she thought. I will hunt you in my girl skin but I'll celebrate as wolf.
—Vivian Gandillon
Advertisement:

Back in 1997, well before the world got its hands on Twilight, supernatural romances for teens were not really the biggest genre out there. One of the more notable of the titles was Blood and Chocolate by Annette Curtis Klause, who also wrote a vampire novel before this one.

The novel revolves around 16-year-old Vivian Gandillon, pretty much a normal high school outsider... who happens to be a werewolf. Though her family once lived in a secluded town where they could all be themselves, they were forced to flee in exile when one of their pack accidentally murdered a human. It is the only rule they hold sacred, the rule that protects them from discovery and extinction. So now they are scattered across a small town, mingling with humanity. Vivian also lost her father in the move, and struggles to hold herself and her mother together.

For the first time, she attends a normal school, and there she meets a human boy, Aiden. He is quirky, an outsider like her. And she finds his kindness a refreshing change of pace from her squabbling pack mates. Her family of werewolves is leaderless with her father dead, and the battle for succession is fearsome. Vivian finds herself unwittingly drawn into the center of the leadership quarrel, and in the sights of a werewolf who would like to call her his own.

Torn between the human world and that of the pack, Vivian struggles to find herself and where she belongs. What does she want more, blood or chocolate?

There was a film version released in theaters in 2007 that is unfortunately In Name Only. Not related to the Elvis Costello album of the same name.