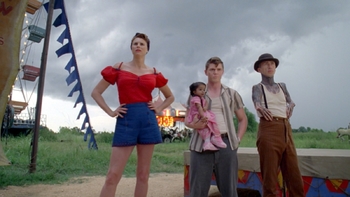 One of the only surviving sideshows in the country struggles to stay in business in the dawning era of television. When police make a terrifying discovery, the eccentric owner of the freaks show spots an opportunity.

In Jupiter, Florida; milkman Bill Palmer discovers his latest delivery to the Tattler household has gone sour. He enters the house and finds an unfinished dinner table and elderly Eudora Tattler dead on the floor. He goes upstairs to find injured conjoined twins, Bette and Dot. They are rushed to the emergency room, much to the disgust of staff but doctors are amazed by their anatomy.

Elsa Mars enters the hospital under the pretence that she's looking for her sick aunt when in reality, she's searching for the twins. She charms information from a candy striper named Penny, inviting her to Fraulein Elsa's Cabinet of Curiosities, and infiltrates the secure wing in candy striper garb. The twins awaken to Elsa, startled but she calls them lucky to have each other. She explains that she investigated their house and wanted to meet them for herself. After longer conversation, it becomes apparent that the twins can communicate with each other without needing to speak. Bette warms up to Elsa after they chat about showbiz and sex whilst Dot remains wary.

Near Lake Okeechobee, a couple make out at a picnic. The girl wants them to have sex and the boy goes to the car to get a gift. A clown, known as Twisty, approaches in filthy clothes and a cap made from scalp. He tries to entertain the girl but when the boy returns, he says he didn't hire a clown. Twisty uses his juggling bats to knock the couple unconscious. The girl wakes up to see Twisty stabbing her boyfriend so she runs only for him to chase her too.

Elsa clips a movie review and discusses her disappointment with a waitress. Across the room, she is furious to see a young man named Jimmy Darling, flirting with a waitress. Elsa reminds him of his hand deformity and he sulkily sends the waitress away. Jimmy reveals his negativity over the Freak Show, knowing that their landlord wants them out. Elsa says that it's true, the landlord's wife wants them gone but she seduced the husband and he let them stay. Jimmy remains unphased and leaves. Elsa refuses to pay for her meal, saying that stars don't pay. At a Tupperware party, Jimmy earns extra money pleasuring housewives with his lobster hands.

Elsa returns to see the twins, who use the plot of 'Gaslight' to describe their mother's murder. She points out an inconsistency and urges them to get their story straight before police arrive. Elsewhere, Twisty kills another couple in bed and a radio announcement states that the couple's son, along with the girl, have gone missing.In the woods, the two kids try to comfort each other as Twisty enters. He tries to entertain the terrified prisoners but traumatises them more as each 'joke' gets more and more violent.

The twins escape the hospital and pack clothes at their home. Elsa offers them a plausible story: Bette wanted to be free of her mother's captivity and stabbed her, Dot stabbed Bette in the upper chest non-fatally. Elsa offers them safety and a new home.

Paul the Seal, Jimmy and Amazon Eve look on as the twins arrive at the Freak Show. Bette's diary entries are upbeat and entranced by Elsa's glamour. Dot is disturbed by Meep (who bites heads off live animals) and Ethel, a bearded lady. She is, however, smitten with Jimmy.

Jimmy and Ethel discuss the revenue from the Tupperware parties. He wants to leave the show but Ethel insists there's no other place for them. That evening, Jimmy witnesses a detective approaching the twins. He argues with him after the detective wants to arrest the twins for their mother's murder. The other carnies are attracted to the argument and fill the tent. Jimmy loses his temper and slices the detective's throat with a razor stowed in his pocket. He then releases the twins from the handcuffs.

The relatively empty carnival has two visitors, mother and son Gloria and Dandy Mott. The spoiled Dandy is anxious to see the freaks. Ethel provides the introduction whilst various contortionists and a sword-swallower perform. The other freaks control the scenery and music. Elsa sings a version of David Bowie's 'Life on Mars'. An elated Dandy gets up at the end and sees the twins, offering to buy them for $15,000. The twins decline, saying they've found their home. Gloria retorts with a jibe at Elsa's singing.

Later on, Twisty rides the deserted carousel. A funeral procession of carnies carries the detective's body into the woods. Jimmy calls for the revolution and they hack up the policeman's body. Twisty lurks and watches.

Elsa confesses to Ethel that she bought the twins not for their own safety but to bring in crowds for the freak show. Ethel agrees that Elsa is talented enough to be her own star. Elsa reveals her own deformity; she's legless from the knees down and wears prosthetic legs.