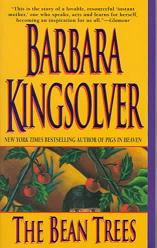 A novel by Barbara Kingsolver about a small town girl named Taylor Greer who decides to drive her car as far as it'll take her and settle down wherever it ends up breaking. Along the way she meets a Guatemalan couple and after traveling through an Indian reserve, she gets saddled with the toddler Turtle. The rest of the novel deals with the relationships between her and the people in her new town as well as the details of this unexpected motherhood.

The novel eventually spawned a sequel: Pigs in Heaven.