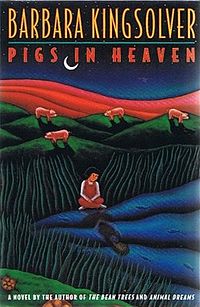 Pigs In Heaven is the sequel to The Bean Trees written by Barbara Kingsolver. It begins two years after the events of the first novel, where Taylor and Turtle live normal lives until a visit to the Hoover Dam sets a big chain of events that affect the two of them. After making an appearance on The Oprah Winfrey Show, a scheming Cherokee lawyer Annawake Fourkiller sees and recognizes Turtle as a Cherokee child, and then initiates a campaign to bring Turtle back to her nation with her surviving relatives. Afraid of being separated from Turtle, Taylor makes a run for it across the nation while avoiding authorities. Meanwhile, her mother Alice starts to hook up with a Cherokee man named Cash Stillwater who turns out to be Turtle's biological grandfather.