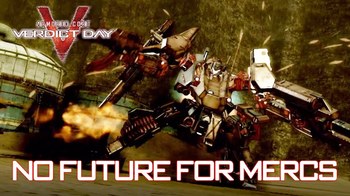 "To secure peace is to prepare for war."
— "No future for mercs" Trailer

Armored Core: Verdict Day is the sixteenth game in the Armored Core franchise by FromSoftware and is the sequel to 2012's Armored Core V. It was published by Bandai Namco Entertainment for Xbox 360 and PlayStation 3 in September 2013.

Countless years have passed and the events of ACV have been consigned to forgotten history. The pollution has cleared, but what should be a celebration of humanity's revival is turning into a prelude for a new apocalyptic war. Across the land, countless structures known as Towers remain from times past, so massive that their interiors are still not fully mapped, but stocked full of valuable Lost Technology. Eager to dominate the new world, the Three Great Factions prepare to battle for the Towers and the unpolluted lands: the wealthy Sirius Executives, the dictatorial Venide, and the inquisitive Ever Green Family, setting the stage for what will come to be known as the "Verdict War".

Verdict Day continues the gameplay set by Armored Core V and offers a number of tweaks. A large number of new parts and new part types have been added. Existing parts have also been rebalanced and renamed. The game introduces the UNAC system, which allows the player to program their own unmanned Armored Cores for use on the battlefield.