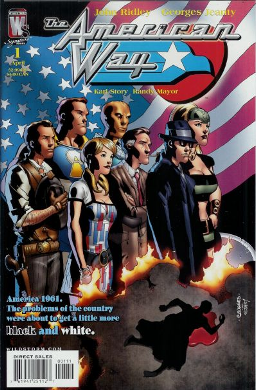 The American Way is a comic-book series created by John Ridley and Georges Jeanty and published by Wild Storm.

In the 1940's, the US Government created the Civil Defense Corps, a team of "super-heroes", ostensibly intended to protect America from "super-villains" and "aliens". In reality, the CDC are all actors, as are their supposed enemies, and the real purpose of the team is propaganda. When one of the team's core members, Old Glory, dies in battle in the 60's and the team's management elects a black man to succeed him, the facade begins to unravel.

A sequel, American Way: Those Above and Those Below, was released by Vertigo in 2017.