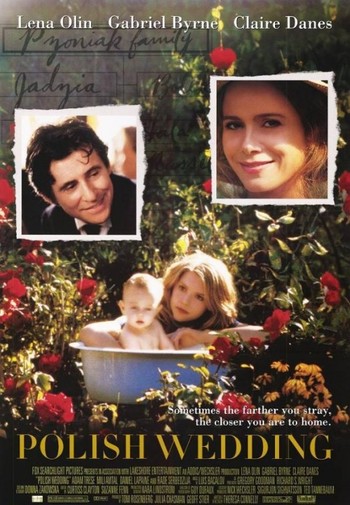 The apple doesn't fall far.
"Marrying my husband was no mistake. I had my reason, only I can't remember what it is."
—Jadzia Pzoniak
Advertisement:

The film revolves around a Polish-American family in the Detroit suburb of Hamtramck, Michigan. Jadzia Pzoniak (Olin) is the matriarch of the family, who married Bolek (Byrne) while she was pregnant. They have five kids: sons Ziggy (who's recently married and a new father to a baby boy who is almost inconsolable), Witek, Koz, and Kris, and daughter Hala (Danes), who is rebellious and habitually flirts and has sex with men. When Russell (Adam Trese), a cop, gets Hala pregnant, Jadzia and the rest of the family pressure him to marry her.