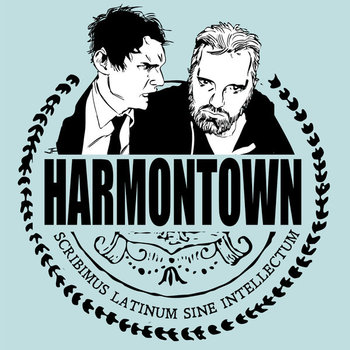 I don't want to get off on any tangents...
Advertisement:

A weekly podcast hosted by the creator of Community, Heat Vision and Jack and Rick and Morty, Dan Harmon. Harmon presides as Mayor of Harmontown, while his Comptroller Jeff Davis (Whose Line Is It Anyway?) acts as announcer, co-host and DJ.

Recorded before a live audience, previously in the backroom of Meltdown Comics and Collectibles in Hollywood but more recently at a dedicated venue at Harmon's Starburns Castle, the show typically features frenetic, free-form discussions concerning society, race, gender and whatever else is on Harmon's mind that day.

Starting in the eighth episode, each session included a Tabletop RPG segment, in which the hosts, guests and occasional audience members take control of the characters. The games were run by Spencer Crittenden, who was recruited right out of the audience. The show began with a Dungeons & Dragons campaign featuring heroes Sharpie Buttsalot and Quark Pffffft, then transitioned into a Shadowrun game before the roleplaying element was phased out and spun into HarmonQuest. Spencer continued to serve as a sort of secondary co-host rather than a dungeon master until the roleplaying segment was reinstated, using the Pathfinder ruleset, in 2017.

A complete archive of the show can be found here