This is a list of characters in Mokepon, all of them happily ready to deconstruct the source material. 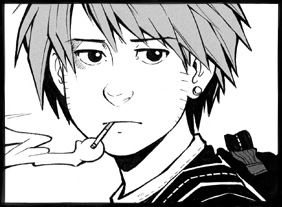 "And this adventure's supposed to be for little kids..."

Our protagonist. An apathetic young man, Atticus is kicked out of his house by his mum at the start of the story, claiming he needs to go on a Pokémon adventure. Due to having been somewhat of a shut-in, Atticus knows next to nothing about Pokémon and is very disconnected from the world he's living in. After being beaten by a childhood friend (sorta), he sets out to take revenge. Along the way, he meets various people, most insane, some slightly less so, and seems to be, dare we say it, softening up. At least towards Dragonthing, his starter. 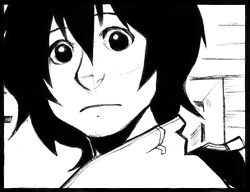 "Because some of us may need to take our opportunities for friendship wherever we can find them."

Atticus' neighbour, who coincidentally starts his journey on the same day that Atticus is forced to start his. Kahn is a kind of rival to Atticus, being more successful at the Pokémon Trainer thing, but he would probably prefer if they just got along. He also has a twin sister, whom he gave the remaining starter Pokémon, Bulbasaur (it would've gone to waste disposal otherwise). 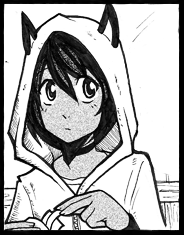 Kahn's twin sister. Like her brother, Mana has an easy-going, sweet disposition and seems naturally inclined to help people (even Atticus doesn't faze her, which is saying something). Still residing in Pallet Town with her parents, Mana stays in touch with her brother via letters. 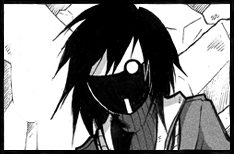 "You've been training hard all day. On top of that, you've caught a few new pokémon. Your whole team's on one health, you're just about to go to the Pokémon Centre, and who should turn up? Gary. Fucking. Oak... Well. Or your rival of choice..."

A highly experienced trainer that Atticus and Kahn meet on Route 22. He calls Atticus out on battling Kahn while his Pokémon were already weakened (though in Atticus' defense he didn't know that) and proceeds to easily defeat Atticus in a Pokémon battle. He's known for wearing a mask, which is apparently popular enough to be sold as merchandise. George later explains that he's the newest member of the Elite Four. 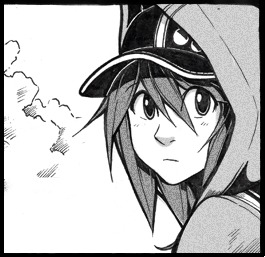 "After all, making friends is what Pokémon is all about!"

A relentlessly cheerful, female trainer that Atticus meets in Viridian Forest. Intrigued by his unconventional methods, George proceeds to follow him around and has shown to be very difficult to deter. With her blind optimism, slight naivete and boundless knowledge on Pokémon, George is Atticus' polar opposite. More often than not, it is she that forcefully moves the plot along, due to her companion's generally passive personality. After Atticus acquires his first badge, he makes it explicitly clear to her he doesn't want to travel with her anymore, leaving her beind in Pewter City. But it's not long until they reunite north of Cerulean City, and since then George has been a fairly consistent travel companion for Atticus. 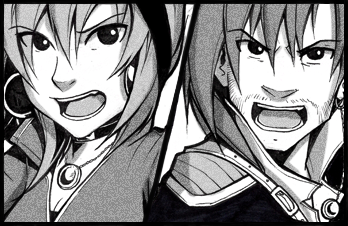 "To protect the world from devastation!!"
"To unite all peoples within our nation!!"

A pair of oddly dressed, shady criminals first seen spying on George's attempt to catch a Pikachu. Apparently, they're part of Team Rocket

, and have been on surveillance for quite some time, until Thaddeus decides to stir up some trouble. The two often quarrel, with the more childish Thad bringing out Trix's worst side, despite her attempts to stay above it.
Known Pokémon: Butterfree (multiple), Raticate (belonging to Thaddeus) 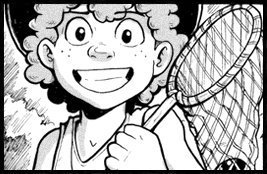 "The battle's still burning! Come at me!!"

A typical Bug Catcher that Atticus encounters in Viridian Forest. Ricardo challenges an unwilling Atticus to a battle, emboldened by the latter's lack of knowledge and careless training methods. His Pokémon don't put up much of a fight however, and Atticus swiftly aborts the battle, finding it much too tedious. Dejected, Ricardo later resolves to broaden his horizons by raising more than just Bug Pokémon, but unfortunately, strays in the path of an angry swarm of Bug Pokémon before being able to act on said resolve. It's unclear whether he survived the encounter. 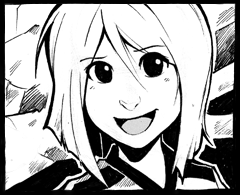 "We didn't burn down the forest yet, did we?"

Ellenora, or Elle, as she's more commonly referred to, is a trainer working at the Pewter Gym. Atticus battles and defeats her, thinking she's the Gym Leader, but only succeeds in earning the wrath of the actual Gym Leader, her boyfriend. While good-natured, Elle is shown to be somewhat simple-minded and doesn't always seem to consider the consequences of her actions. 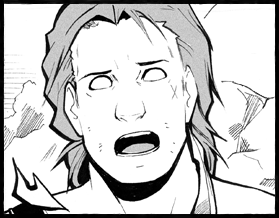 "You're a man. Act like one and face up to what you started."

The Gym Leader of Pewter Gym, Stein is an intimidating giant of a man that suffers from bad eyesight. This does not deter his battling skills though; he easily crushes Atticus in their first match. It's later revealed that his severity was because Atticus had made Elle cry. While good-natured, Stein is shown to be somewhat simple-minded and doesn't always seem to consider the consequences of his actions. 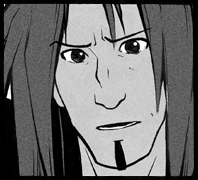 "... I know you're in there. And I bet you know exactly what happened here."

An implied Gym Leader, nicknamed Cap'n, who acts like a boss to Elle and Stein. He's investigating the cause of the fire that burned down Viridian Forest, with Atticus and George barely escaping his suspicion. 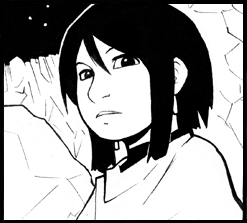 "Friendship and happiness... They never quite explain how to achieve that. Just a vague notion that they assume everyone can fit into. And they never let you know there's an alternative."

An executive of Team Rocket, Estelle is an unflappable young woman that Atticus comes across during his trek through Mt. Moon. After they manage to escape the cave's crazy Clefairy, she convinces a disillusioned Atty to join her organization. 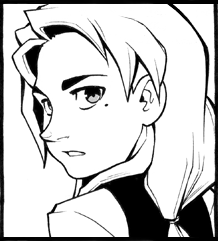 "I will not battle you. Now go have fun running about and making too much noise like you children tend to do."

The Gym Leader of Cerulean Gym, Artemis loathes her job and would rather read a book than accept challenges from trainers. However, when Dragonthing provokes her temper, she proves more than willing to put Atticus and his Pokémon in their places. Artemis ends up losing the battle, but realizes Atticus is a member of Team Rocket and alerts the authorities. However, a misunderstanding ensues when Officer Jenny arrives, causing Artemis herself to be arrested. 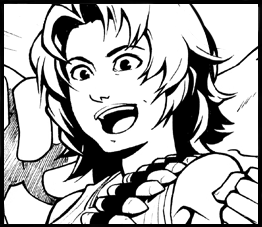 "A couple of wet blankets lose their eyebrows and suddenly they take away our right to stick our heads into exploding trashcans!"

The Gym Leader of the Vermillion Gym and the daughter of Lt. Surge, Allie is an energetic young woman who decides to forego the Gym Leaders' luxurious holiday on the SS Anne and excitedly accepts when Atticus challenges her to a battle. 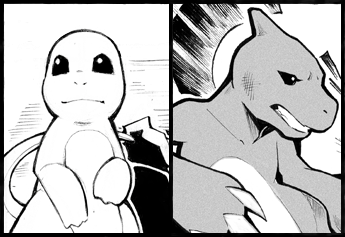 Atticus' first Pokemon, she was pretty much picked at random by her trainer. She's ever eager to serve, but unfortunately bound to a trainer who doesn't really care and is, intially, treated poorly. Like other Pokémon, Dragonthing didn't know how to attack without the help of a trainer, but being bound to Atticus seems to have had an effect on her. She later evolved into a Charmeleon during an all-night grinding session.

Khan's starter pokemon. It's first seen dishing out a Curb-Stomp Battle to Dragonthing, whom Atticus didn't know how to command at the time. His rematch with her was decidedly less one-sided, as he was tired out from training. Merric later evolves into a Watortle. 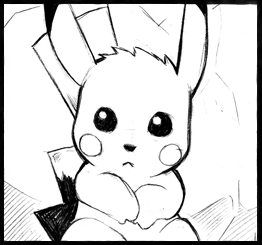 Atticus' second pokemon. Rat is caught more or less at random in Viridian Forest and doesn't reappear until Pewter Gym, where he undergoes a crushing defeat (twice!). Although he's been treated quite terribly by Atticus, Rat seems to determined to prove himself and win his trainer's affection. 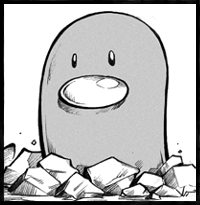 Elle's first seen Pokémon, Gutripper looks largely harmless and is therefore immediately underestimated by Atticus, who calls it "a thumb sticking out of the ground". Its high speed coupled with its ability to pop in and out of the ground allow Gutripper to evade Dragonthing's initial attacks, but it eventually falls after two Ember attacks. 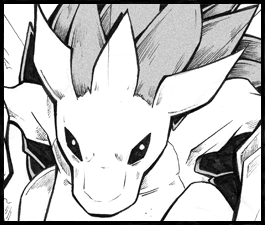 Elle's second Pokémon, Serialslasher looks a lot more intimidating than its teammate, but is also a lot more of a wimp. Even though it has the upper hand for practically the entire battle, it technically forfeits (Elle recalls it from the battle) when Dragonthing burns its paw. 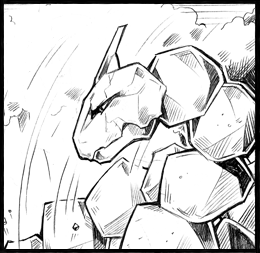 Stein's only known Pokémon, though he claims to have others, Bob is a force to be reckoned with. He manages to take out both Dragonthing, who had just been healed up by a Super Potion, and Rat, who admittedly had had no training yet, in one hit in their first battle. Even when Dragonthing has evolved, Bob proves to be a difficult opponent, but he is eventually defeated by an onslaught of Ember attacks. 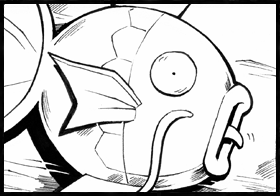 Sold to Atticus by Russel the shady salesman, it has proven about as useful as you'd expect from a Magikarp. It was used by Team Rocket executive Estelle to clear a path through a large group of explosion-happy Clefairy, preventing Estelle and Atticus from being trapped inside Mount Moon, so there's that at least. 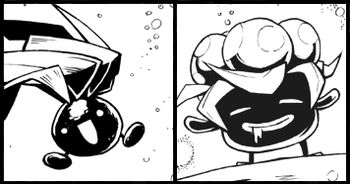 A happy-go-lucky Pokemon, Venus was caught by Kahn at some point and subsequently given to Atty as a gift. She has mostly been seen hopping about energetically, unaffected by Atty's apathy. She later evolved into Gloom during a grinding session in preparation for the Vermillion Gym. 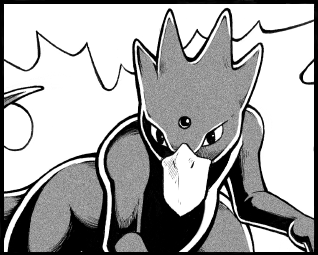 Artemis' Golduck, Niobe is a powerful opponent that shares her trainer's ill temper. However, this eventually becomes her undoing when she disobeys Artemis' commands to satisfy her vendetta against Dragonthing, giving Venus the time to drain away the last of her health with Absorb.