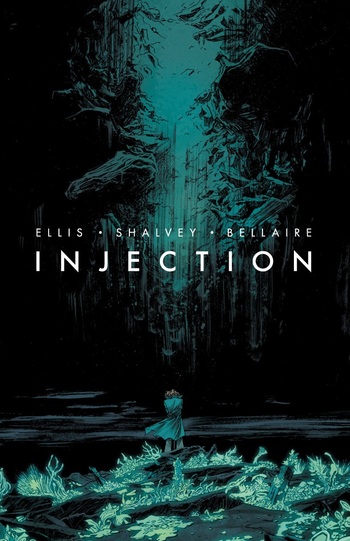 Something like an animal. Capable of responding to environment and appetite. Capable of bonding with Sim's strategic thinking and Viv's reasoning processes. Doing science like Maria and building things like (Brigid).
— Robin Morel, describing the Injection

Warren Ellis does The League of Extraordinary Gentlemen.

Once upon a time, there were five crazy people, and they poisoned the 21st Century.

Injection is a comic book series from Image Comics, written by Warren Ellis and drawn by Declan Shalvey, with colors by Jordie Bellaire. It can be considered a sort of spiritual sequel to Ellis and Shalvey's six-issue run on Marvel's Moon Knight. It tends to run monthly for the duration of a single arc, with the book going on hiatus for several months between storylines. Ellis has said it's planned to end around issue #30. It's currently suffering through a major Schedule Slip due to various factors in both Ellis and Shalvey's careers, and is tentatively planned to start back up in 2020.

Under the auspices of the British government, five experts in their respective fields — a paranormal investigator, a secret agent, a hacker, a detective, and an occultist — come together as a futurist think tank dubbed the "Cultural Cross-Contamination Unit."

The result of their brainstorming was that the future held not solutions or adventure, but rather decades or even centuries of mediocrity. Rather than accept this, they invent a countermeasure: the Injection, a program that they deliberately released into the Internet, programmed with many of their forms of expertise, in an attempt to kickstart and speed up the coming future.

A year later, the Injection has attained a form of sentience, and it's doing its job almost too well.