The Captain
Thomas Rush's right hand man/woman, and, as their name suggests, Captain of Security. When Rush boarded a train headed for Hope County to provide relief to Prosperity, the Captain was right there with him, and saw firsthand just how bad the Highwayman problem was. 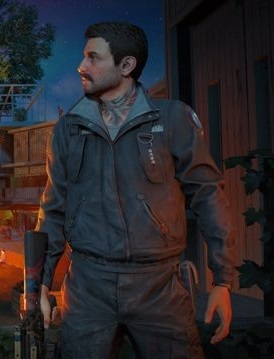 A former soldier from before the Collapse who now heads up a relief and reconstruction Task Force on the West Coast. After hearing of Prosperity's plight, and knowing that establishing a foothold in Hope County would allow him to expand his relief efforts east over the Rockies, he gets a team together and sets out to the Holland Valley to assist, but then things go very wrong.

Another associate of Thomas Rush who is caught in the train attack at the very beginning of the game. After meeting back up with his boss and the Captain the trio make their way through the train wreckage until being cornered by the Highwaymen near the edge of a cliff. After a brief confrontation he is brutally murdered by Lou via having his skull caved in with her helmet. 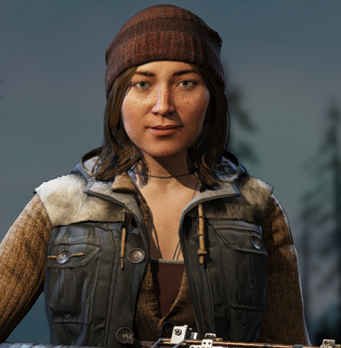 The daughter of Nick and Kim Rye. She seeks out the help of Thomas Rush to help bring Prosperity back from the brink of destruction at the hands of the Highwaymen, but things go... wrong, to say the least. 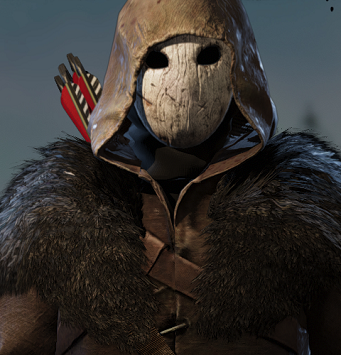 Joseph Seed's personal Enforcer. This enigmatic figure silently watches over New Eden in Joseph's stead, answering only to him and his own blood—that is, Ethan. When Joseph finally returns to New Eden, he gives charge of the Judge over to the Captain. They have little to say, but, according to Joseph, the only language they speak is violence, and actions always speak louder than words when it comes to the Judge. As for just who they are, they certainly aren't telling, but many survivors hint that the Judge has a much deeper connection to Hope County than it seems... 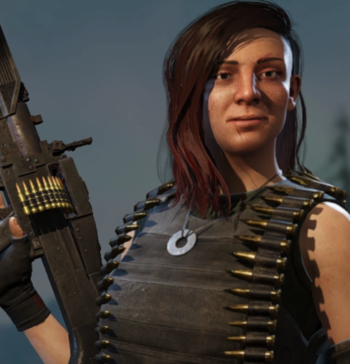 A former Highwayman soldier who ended up becoming the mother of Hurk's child. Truth be told, she would have been perfectly content sitting this fight out and watching from the sidelines, but then the Twins made the unfortunate mistake of trying to take Gina's baby from her, and then tried to have her killed in a race to the death. Now, she's pissed, and she's going to see the Twins burn for that they did. 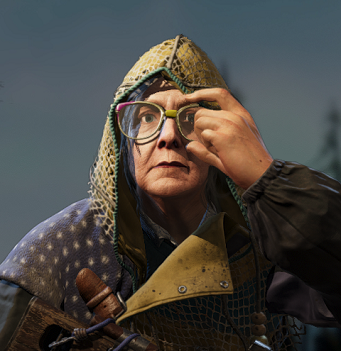 An elderly, possibly senile, sniper. The Captain finds her having set up a shooting range at an old grain silo. Impress her, and she may just join your crew. 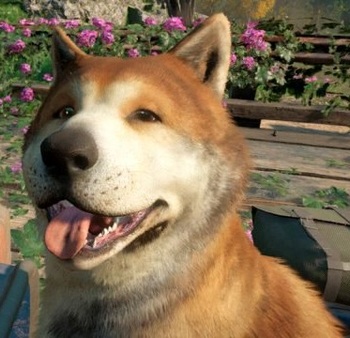 A dog rescued from becoming a Highwayman's meal. Loyal to the Captain and ready to fight by their side, he is highly effective at scouting and sniffing out enemies. 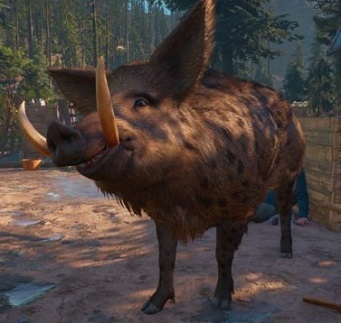 A very large boar that the Captain can befriend after rescuing it from Highwaymen. He's fairly tame...if you're not a Highwayman. 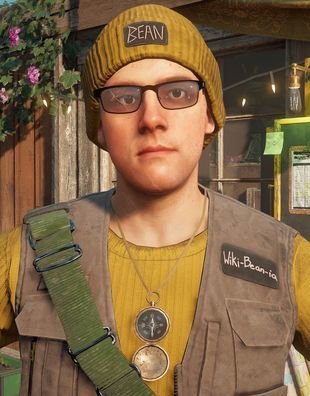 The scoutmaster who runs Wiki-Bean-ia. Plucky, but a bit...ignorant of more adult topics, his lifelong goal is establishing a worldwide information sharing system, starting right here in Hope County. While the "worldwide" part is a bit out of reach for the moment due to the lack of internet or any sort of long range communication, Bean and his scouts are more than willing to help map out Hope County for Prosperity and provide much needed information for their survival against the Highwaymen. 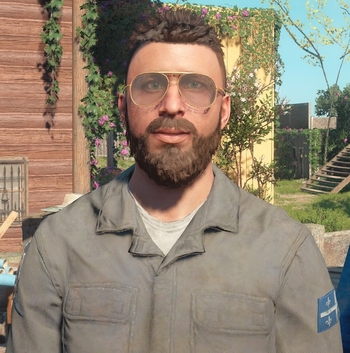 A Canadian helicopter pilot who offers his services to Prosperity and the Captain. In an age where someone having a working aircraft, let alone a helicopter, is a rare sight indeed, Roger (pronounced "Ra-jee") is an ace at the controls of his chopper, "La Grosse Patate". Along with ferrying the Captain across Hope County, he also offers to take the Captain on expeditions, risky operations to rob the Highwaymen of their bounties at faraway locations and make off with some valuable loot. 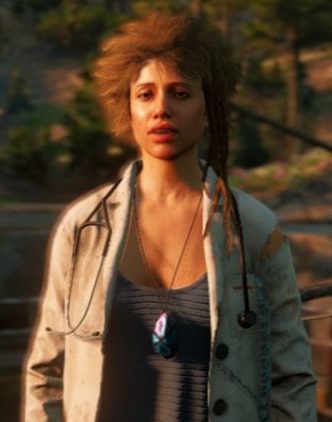 Pronounced "Like 'Felony'", Selene is Prosperity's resident medical expert. She was a medical student, but couldn't complete her degree before the Fall—likely due to her clear fondness for psychedelic drugs. Regardless, her all-natural concoctions keep you and the other residents from dying of infections from minor wounds, and even more serious ones from bullets and the Highwaymen. 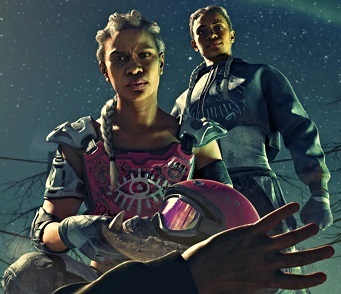 Twin sisters and leaders of the Hope County chapter of Highwaymen. They believe that trying to restore society is a useless gesture, and so they devote their efforts to ransacking other survivors for resources and killing anyone who gets in their way, and having a hell of a good time while doing it.

Father of the twins and founder of the Highwaymen. Not much is known about him or the kind of relationship he had with his family but he drives much of the plot forward even in death due to his past actions and the way he raised his daughters.

A high ranking member of the Highwaymen who becomes an unlikely ally to the Captain in their mission to stop the twins. Most of his goals and motivations are self-serving, but he is genuinely helpful and (reasonably) respectful towards the Captain, making him a powerful and useful friend.

The new warden of the Hope County Jail who uses slave labor to manufacture bullets for the Highwaymen soldiers to use. He is killed by the Captain so that they can take his place in the upcoming derby and get close enough to the twins and other Highwaymen VIPs to assassinate them. 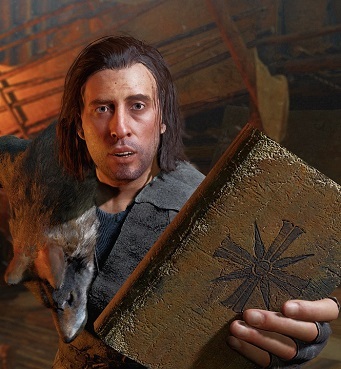 Joseph's only begotten son. When Joseph disappeared into the north, he was left with the burden of keeping New Eden together. He believes his father has died, but the people of New Eden refuse to accept this until they have proof, and so Ethan tasks the Captain with venturing northward and finding proof of Joseph's demise.