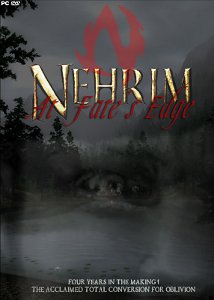 "I will grab Fate by the throat, it shall never drag me down."
— Ludwig van Beethoven

is a total conversion mod for Oblivion. The colossal four-year project by SureAI (Also creators of two more total conversions for Morrowind, Arktwend and Myar Aranath, which are prequels) was a remarkable undertaking. The standard Oblivion mechanics were revamped playing more like a combination of Morrowind and Gothic than its base game (Stat Grinding is possible, but skills are mainly raised through experience points that are spent at trainers ala Gothic. There is no level scaling or respawning dungeons.) and an entirely new world was created, complete with lore and quest lines. The mod features a hand-crafted "continent-sized" map and a core storyline that could last over forty hours. The voice-acting is in German, but there are English subtitles and all the quest text has been translated into English. Additionally, the mod boasts impressive hand-designed dungeons and loot in place of Oblivion's randomly generated dungeons note while the same in every game, Oblivion's dungeons were initially created by Bethesda via random generator and spread sheet generated loot. It has won the Best Singleplayer Mod award for 2010

The Mod takes place on the war-torn continent of Nehrim, where the Chancellor of Middlerealm, Barateon, has outlawed all magic as well as declared war on the Northrealm. The Player is a member of a small monastery, who, one night, receives a mysterious letter on his doorstep. The letter leads him/her to an abandoned mine, which is unfortunately infested with trolls. He is eventually rescued by the mage, Merzul, who drafts in the PC into the local resistance. And thus begins your grand quest, though not all is as it seems...

In 2016, the sequel Enderal, a total convertion for Skyrim, was released.

I will grab this wiki by the throat, it shall never drag me down.