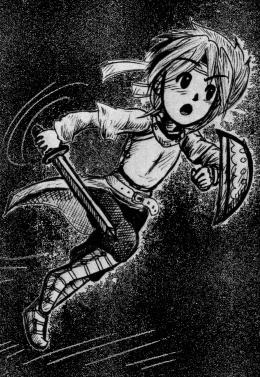 Tell your story. Leave your legacy.

It is a unique text-based game, for several reasons. Players are born into families made up of other players, villages are built by players, dungeons are delved (and created) by players, wars are (planned to be) started and waged by players, and new lands are constantly discovered and tamed by, you guessed it, players.

Building spoiler web-sites with maps and catalogues is prohibited by staff. It is encouraged that players discover what races, items, areas, or most other game content there is on their own.

Two players of the opposite sex in the game world can try to create a child (graphic content optional). If successful, the female player will become pregnant, and eventually deliver a baby. The mother will then assign the newborn a birth name, and a player who has created an account will be placed in the shoes of the new child. Upon being born and during the first few weeks (real world), new players will have limited abilities: they will not be able to initiate combat, speak correctly, or create/join work projects. It is really up to other players in the area (hopefully the parents) to help out the little ones for a while. Players cannot choose their race or family, but they may choose their gender. Once adults, they may do literally whatever they wish. It's a hugely open-ended game.

Faery Tale Online doesn't use levels for experience gain, instead everything is skill based. PVP is completely unrestricted. Since Faery Tale Online is attempting to be a simulation of a plausible fantasy world, it allows players to deal with their own problems. However, players are free to make up their own laws and rules to deal with trouble-makers. If you were to play as a mass-murderer, you may be hunted down. The ability to use magic does exist, though it is rare.

It's suggested that players log into their characters at least once a day to feed them, check for damage caused by other players, or whatever else they may have been working on. When a player logs out, their character is left doing whatever it was when they left. If you get attacked while logged out, your character will defend him or herself using whatever they were left with.

The game world relies on its own condensed time system. One game year lasts 6 real life days, one game day lasts 12 real life hours and there are 12 days in a year. Since your character begins as a baby, you will find that some actions are not allowed until you have grown a little older. Characters grow stronger with age until a certain age (dependent on race), after which your character will grow weaker and weaker until he or she dies of old age.

The lack of pregnant mothers compared to the number of people waiting to play means that there is a waiting period between sign-up and entrance into the game itself. FTO is also still in Beta, with many planned features are still to come, such as farming and sea travel.

Now has a fan-run forum

to make up for the long time absence of an official forum and for those uninterested in the Facebook group.