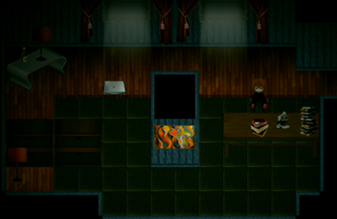 The Protagonist in their dark, lonely space station.
"Recently, my dreams have become increasingly hard to control. Is this a sign of my deteriorating mental health?"
—Miserere's nameless Protagonist
Advertisement:

For twelve years, an unnamed astronaut has been living solitarily in a small space station located on a planet close to the center of a galaxy. While the astronaut initially enjoyed their solitude, they now primarily experience boredom and depression. Now the astronaut's only joy is their vivid dreams during their constant sleep. However, recently the astronaut's lucid dreams have become more disjointed and difficult to control. As our protagonist continues to sleep and dream, they realize that they have painful demons from their past that they must come to terms with.

. It is highly inspired by the RPG freeware game Yume Nikki, another Surreal Horror game made on RPG Maker which involves heavy exploration of bizarre dream worlds. The most recent version of Miserere, v1.02, was completed August 2012. This version can be downloaded here

Many of these tropes are found within plot twists revealed during the endgame. Therefore, expect many unmarked spoilers ahead. It's recommended to play through the game before perusing the tropes on this page for the best possible playing experience anyway.