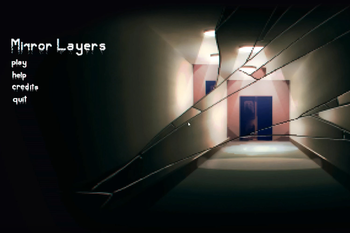 "We ask you only to give us a part of you. Part of your identity."
Advertisement:

Mirror Layers is a short freeware Psychological Horror game on PC, first created in 14 hours for a game jam in November 2016, and then extended during the following month, with the final version available here

. It is perhaps best well-known for the amount of real-life interaction necessary to complete it, as well as for its fantastic levels of Mind Screw.

The game is set in what is ostensibly the main character's home, which at first seems to be empty. Don't worry if that makes you feel nervous though, cause it's not gonna stay that way for long...