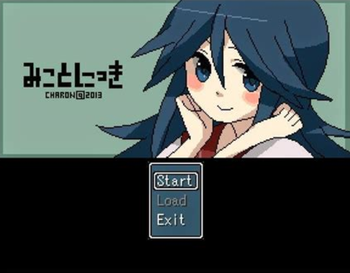 Mikoto Nikki is a 2013 Visual Novel-style game, made by Charon in RPG Maker 2000. It can be freely downloaded here

Matarou has always been in love with Mikoto Takashiki. One day, he confesses to her and they begin dating. She brings him over to her house to make him dinner. While he's waiting, he goes around the house and finds scraps of her diary. As he collects more pieces, he slowly realizes that there may be something wrong with Mikoto.

Not to be confused with either Yume Nikki or Mirai Nikki.