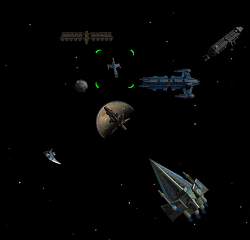 It began life as a complicated strategy game he played with his friends. He started turning this game into a mod for the original Escape Velocity, but due to engine limitations he could not complete it and put it aside for other projects. When EV Nova came out, he decided to complete what he had started 6 years previously, and he had finished it less than a year later, making it one of the first Nova total conversions to be completed.

; however download links that don't rely on Stuffit are tricky to find.