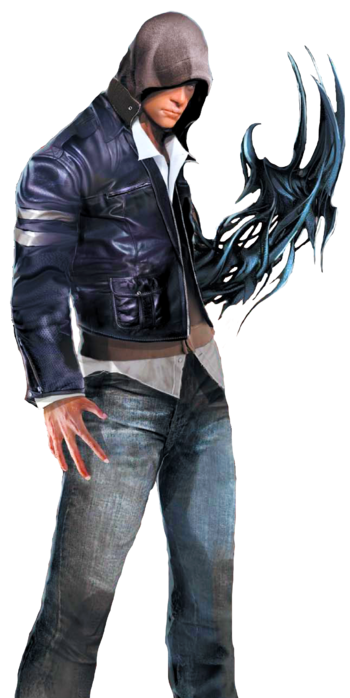 "They call me a killer. A monster. A terrorist... I am all of these things."

The protagonist, a man who wakes up in the GENTEK morgue with bizarre and horrifying powers and no knowledge of events prior to that point, aside from his name and that he was once a scientist. Confused, enraged, and determined to reclaim his past, he sets out to do so by hunting down his old colleagues.

In the sequel, Alex is no longer the protagonist and differs a great deal in characterisation, stemming from some bad experiences in between the games recounted in The Anchor. As such, these are the additional tropes that apply to him in Prototype 2. Spoilers ahead. 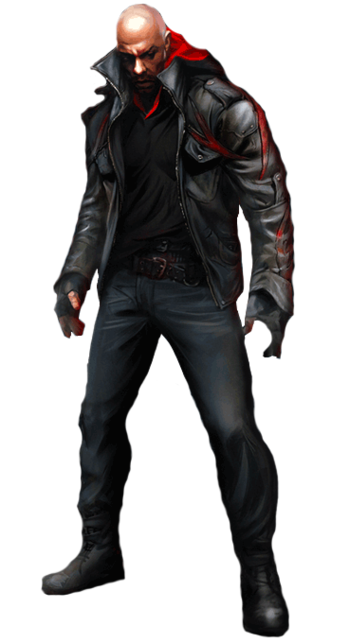 "My name is Sgt. James Heller, and I will destroy Alex Mercer."

A marine who lost his family to the infection while he was away on duty. He returns to Manhattan, runs a series of suicide missions in the Red Zone, and is eventually mortally wounded. Mercer is impressed by his skill, however, and infects Heller with his unique strain of Blacklight. Now a newly super powered Heller vows to kill Mercer.

"Someone's gotta know what the fuck is going on here."

Alex's younger sister and the first person he remembers after he awakes. A journalism student and spitfire with a sharp tongue and an inquisitive mind, she loves and idolises her older brother, despite not having seen him in five years, and acts as his intelligence gatherer and data analyst.

A priest who runs the church in the Yellow Zone that Heller and his family once attended. He tried to meddle with Blackwatch's experiments, but failed and barricaded himself in his church. Heller snaps him out of his Despair Event Horizon and Guerra provides him with intel on Blackwatch supplied by a contact called Athena. Alex Mercer and a horde of Infected kill him after Heller becomes a threat to his plans.

"My medical opinion's not for sale."

A pathologist who knows some uncomfortable secrets, content to run the morgue in a teaching hospital in New York. He once worked for GENTEK, but quit on ethical grounds some time ago. Dana sends Alex to him in the hopes that he can cure the parasite.

"I want it on a slab. I need to know what makes it tick."

The Director of Research at GENTEK; Alex's ex-boss, who knows more of Blackwatch's secrets than is healthy due to his insatiable scientific curiosity. This fascination extends to Alex's abilities and eventually leads to his death.

Alex's ex-girlfriend and a scientist like him; her picture still hangs on the wall of his apartment. She helps him create a cure for the virus ravaging Manhattan. One of the viruses, anyway. Specifically, Alex himself; Karen was (possibly) forced into working for Blackwatch and the "cure" turns out to be a parasite designed to kill him.

The lead virologist of Gentek, he's also in charge of its major projects in New York. Because Heller was infected directly by Alex Mercer, Koenig has taken a particular interest in him. He is one of Mercer's spies, having been infected with the same strand of Blacklight that gave him and Heller their powers, and was in charge of developing Whitelight - an upgraded version of Blacklight.

The Chief Financial Officer of Gentek, Galloway is in charge of Gentek's financial affairs. She is also one of Alex Mercer's spies, having been infected with the same strand of Blacklight that gave him and Heller their powers.

Officially designated the 1st Biological Warfare Command, Blackwatch is the government military force in charge of containing viral outbreaks. Their elite soldiers are handpicked from various Special Forces organizations, and each member is fully committed to stopping Redlight, no matter the means.

Soldier: Is it true that he caught the last Runner on his own?
Randall: Not caught. Killed.
- Discussing Cross

A highly skilled and dedicated member of Blackwatch who believes wholeheartedly in what they claim to fight for: protecting the American people from the threat presented by the virus, whatever it takes. He leads a team of fellow veterans, the Wisemen, and has a reputation for surviving and winning battles with even the most powerful infected creatures.

Alex: Even Randall's not crazy enough to nuke Manhattan.
Cross: You're wrong.

The current leader of Blackwatch, directing their movements in Manhattan. He has been in the organisation long enough to remember Hope, Idaho, and the methods used to contain it.

The commander of Blackwatch operations in NYZ.

The major military force on Manhattan during the outbreak.

The leader of the Marines in Manhattan and Randall's second-in-command.

Alex: What are you?
Greene: The reason.
Alex: For what?
Greene: Everything!

The last surviving inhabitant of Hope, Idaho, a town that was destroyed after being used as a testing ground for a biological weapon, to prevent the disease from spreading. She appears "burnt out" and catatonic after forty years of experimentation by GENTEK. There is almost certainly no remnant of "Elizabeth Greene" left; all that remains is the virus in an empty human host. Unfortunately, it is both intelligent and very patient.

After Alex removes the parasite, he attempts to kill Greene by using it on her, but her body rejects it. The result combines Mercer's and Greene's DNA and becomes something new: a creature with characteristics of both the Redlight and Blacklight viruses. It is not happy with its "father" for attempting to destroy it.

Of all the children born during Hope, Idaho's infection, only one did not suffer fatal defects within months of birth. Codenamed PARIAH by the military, the surviving child was forcibly separated from his mother, Elizabeth Greene, and moved to a secure facility for study and containment. He never appears in the game, but plays a fairly large part in the Web of Intrigue.