Video Game / The Adventures of Rocky and Bullwinkle and Friends 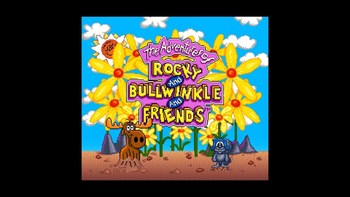 The Adventures of Rocky and Bullwinkle and Friends is a title shared by not one but two games that were released within a year of each other. The first was an 8-bit 1992 Platform Game for the Nintendo Entertainment System and Game Boy developed by Radical Entertainment and Published by THQ. It has been considered one of the worst games for the systems, considering graphics, soundtrack, and gameplay.

However, the 1993 16-bit version for Super Nintendo Entertainment System and Sega Genesis was created directly by THQ. While also a side-scrolling platformer, it also featured the addition of 2 mini-games at each level.

Tropes present in these games: