Film / The Pride of the Yankees 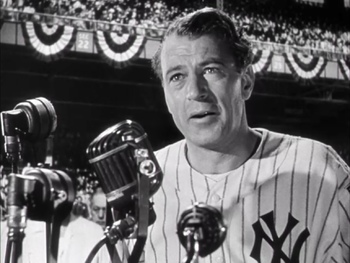 The Iron Horse saying goodbye.
"People all say that I've had a bad break. But today... today, I consider myself the luckiest man on the face of the Earth."
Advertisement:

A 1942 biopic dramatizing the life of New York Yankees great Lou Gehrig, The Pride of the Yankees was directed by Sam Wood and stars Gary Cooper as Gehrig, with a supporting cast including Teresa Wright, Walter Brennan, Dan Duryea, and Babe Ruth as himself.

The film starts with Gehrig as a boy in New York City, a child of immigrant parents who want him to go to Columbia University and become an engineer. Lou's mother is dismayed when his feats on the Columbia baseball team draw the attention of the New York Yankees, who wind up pulling Lou away from his studies to play baseball.

Lou quickly becomes a huge big-league star, but the film pays more attention to his romance with and marriage to the stylish, feisty Eleanor Twitchell (Wright). Theirs is an ideal, loving marriage, as Lou racks up award after award, playing over 2,000 consecutive baseball games for the Yankees—until he is struck by a terminal illness, amytrophic lateral sclerosis, which afterwards would be popularly known as "Lou Gehrig's disease". A dying Gehrig has to retire from baseball, and the film ends with his iconic farewell speech to the fans in Yankee Stadium.

The Pride of the Yankees was released three years after Gehrig's retirement and just one year after his death from ALS. It received 11 Academy Award nominations, it is often on lists of the best baseball movies of all time, and it is guaranteed to make a Yankees fan cry.