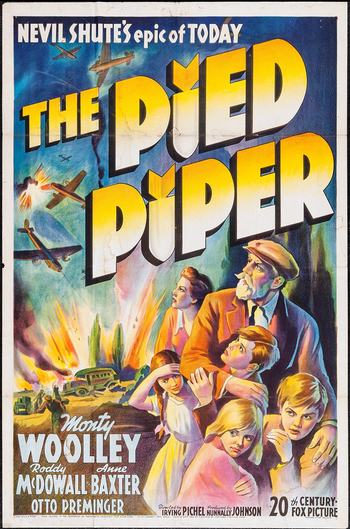 The Pied Piper is a 1942 film directed by Irving Pichel.

France, early June 1940: John Howard (Monty Woolley) is an upper-class Englishman in his fifties, on a fishing vacation in France near the Swiss border. It is not a good time to be in France, as John and the other guests at the isolated country inn learn via a radio broadcast that the war has gone very bad, with the English having evacuated via Dunkirk, and the Germans having broken through the front in northern France.

Also vacationing at the inn are Mr. and Mrs. Cavanaugh and their children Ronnie (Roddy McDowall) and Sheila (Peggy Ann Garner). Mr. Cavanaugh is a League of Nations official, and he and Mrs. Cavanaugh believe they must return to Switzerland so he can take up his duties in Geneva. However, they fear that Switzerland will be invaded next. When John announces that he will make his way back to England, the Cavanaughs ask him to take their children along with him to England and safety. (As it turned out, the Germans never did invade Switzerland and Switzerland would have been safer than England, but at the time no one knew that.)

John grudgingly assumes responsibility for Ronnie and Sheila. They head northward into the chaos that is France as the German army pours in, starting out on a train, then getting a bus, then forced to travel on foot. John, rather against his will, keeps accumulating additional child refugees (hence the title, a Shout-Out to "The Pied Piper of Hamelin"). They make their way past Chartres to a small town and the home of the Rougeron family, old friends of John's. Daughter Nicole Rougeron (Anne Baxter) volunteers to help them the rest of the way to Brest on the coast, where they hope to find a boat to England.

Otto Preminger has a key role in the third act as a German officer, Major Diessen. Alfred Newman composed the music. Based on a novel by Nevil Shute.