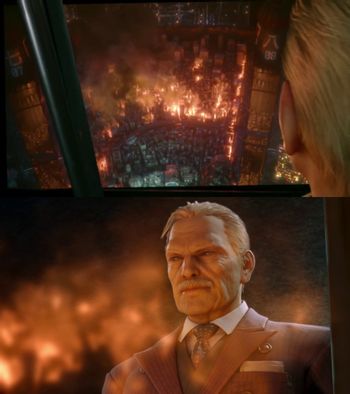 "Truth...justice, honor, freedom! Vain indulgences, every one(...) I know what I want, and I take it. I take advantage of whatever I can, and discard that which I cannot. There is no room for sentiment or guilt."
Kefka Palazzo: I will destroy everything... I will create a monument to non-existence!
Party Member: Life will go on! There will always be people, and dreams!
Kefka: No! I will hunt them down. I will destroy it all! Destroy! Destroy! Destroy!!
Advertisement:
Party Member: We won't let you harm another living being!
Kefka: Hee-hee-hee! But what's the fun in destruction if there are no "precious" lives lost?
—Final Fantasy VI

Here are the vilest, most head-explodingly evil characters in the Final Fantasy franchise.