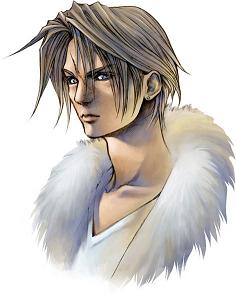 A skilled soldier who acts as the main character. Though he is one of SeeD's most accomplished students, his cold and professional demeanor ostracizes him from everyone else. He has a rivalry with Seifer, and specialises in the notoriously awkward gunblade. 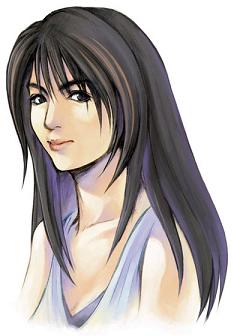 A member of the Timber resistance group "Forest Owls". Her outgoing and happy-go-lucky attitude contrasts sharply with Squall, as does her lack of actual battlefield experience. She strikes up a relationship with Squall and becomes determined to crack his shell. She wields a boomerang-esque weapon called a Blaster Edge. 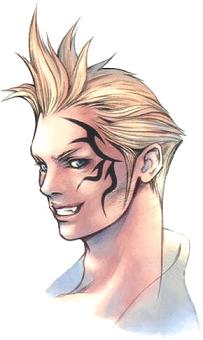 "Why don't you try to show a little more passion...? You know, like me!"
Voiced by: Noriaki Sugiyama (Japanese) [Dissidia Final Fantasy: Opera Omnia]

A fellow SeeD who works alongside Squall and Selphie. Though he appears to be a comic-relief, hot-blooded goof at first, he is actually a highly competent soldier with a deep knowledge of world history and a lot of integrity, quickly proving that he will do anything for his friends. In many ways, he is in fact the most secure and confident of the whole group. He uses no weapon in battle, preferring instead to use martial arts. 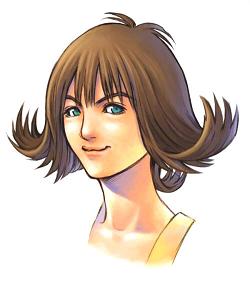 A transfer student to Balamb Garden who ends up working alongside Squall and Zell. She is surprisingly perky and upbeat for a soldier, but behind her smiling face lies a psychotic, destructive streak that surfaces during times of stress. She is one of the more observant and practical members of the party. Also, she likes trains.

"You know, the boys often choke on this test when I come with them."
Voiced by: Miyuki Sawashiro (Japanese), Kristina Pesic (English) [World of Final Fantasy]

Squall's instructor at Balamb Garden. Beautiful and intelligent, she is adored by the student base to the point where she has a fan club. However, behind her perfect appearance lies an insecure human who struggles to control her own emotions, and who has unrequited feelings for Squall. 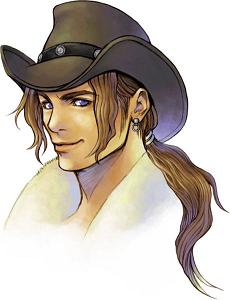 "Thanks for the support, but I never miss my target."
Voiced by: Daisuke Hirakawa [Opera Omnia]

An expert sniper hailing from Galbadia Garden who joins the Balamb Garden party on an assignment. He likes to style himself as a cool, unflappable gunman and complete ladies' man. However, this is just a facade so he can cope with the suffocating pressures of his job. His true personality is much more shy and dorky. 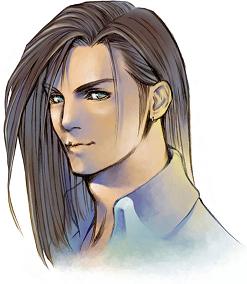 "I speak with passion, from the heart! That's what matters most."
Voiced by: Hiroaki Hirata (Japanese), A.V. Kennedy (English) [Dissidia series]

A Galbadian soldier who dreams of becoming a world-renowned journalist. His dorky and excitable demeanour obscures his extensive combat experience and natural courage. He uses a machine gun in battle and is the main character in the flashback sequences that Squall's party experiences throughout the game. 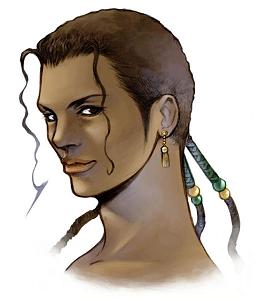 "You cut a pretty pitiful figure up there. I'd say you're about a -3 on the manliness scale."

One of Laguna's best friends and fellow Galbadian soldier. He has a sharp wit and often pokes fun at Laguna, but also trusts him with his life. 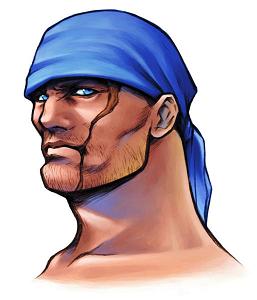 A Galbadian soldier and the third member of Laguna's unit. His intimidating appearance on the battlefield contrasts sharply with his caring demeanour outside of it. He is rendered mute after suffering a serious injury to his throat during battle. 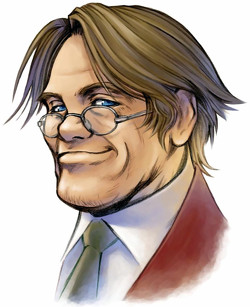 The headmaster of Balamb Garden, and one of the original founders of SeeD. 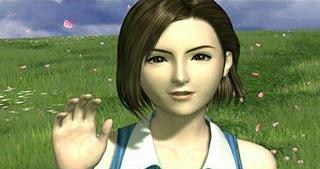 "You cannot change the past, but seeing it once more is enough."

A mysterious girl who shares a connection with Squall, Laguna, and SeeD. She is hunted by various factions during the game, most notably by Sorceress Edea.

The General of the Galbadian Army and Rinoa's estranged father.
Julia Heartilly 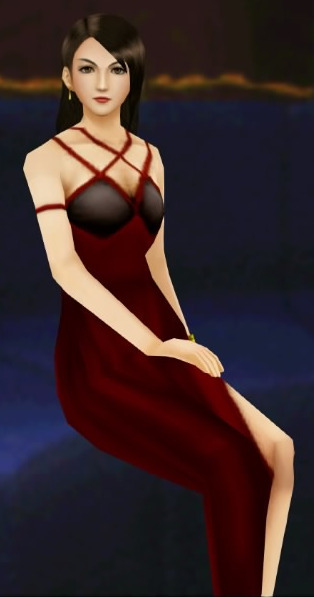 A lounge singer in Dueling City that appears during Laguna's flashbacks. Like most of the Galbadian army, Laguna has a crush on her. Unlike everyone else, she actually returns his interest.
Raine Loire 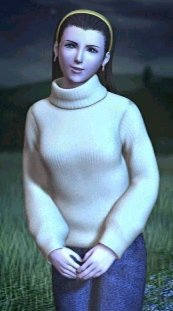 A resident of Winhill, and Ellone's Parental Substitute. She eventually becomes Laguna's wife and Squall's mother.

A high-ranking member of SeeD and Quistis' closest friend at the start of the story. She serves as an aide to Headmaster Cid and a second-in-command of sorts.
Nida

A member of SeeD who graduated with Squall, Zell and Selphie.
Dr. Kadowaki

Balamb Garden's resident doctor.
The Pigtailed Girl in the Library

A student at Balamb Garden who's frequently at the library. She has a one-sided infatuation with Zell.
Ma Dincht

Zell's adoptive mother and a resident of Balamb.
Martine
"Failure is not an option." 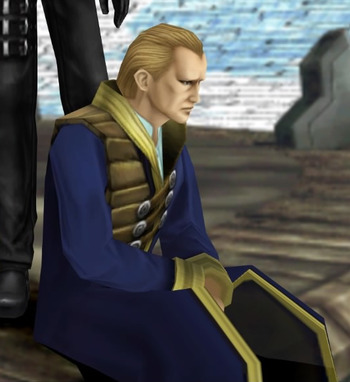 The ruler of Galbadia Garden.
Zone & Watts
"Gathering info is my specialty sir!" 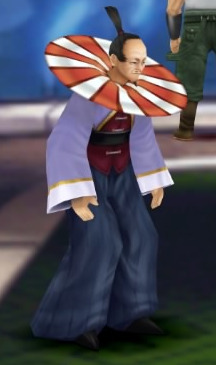 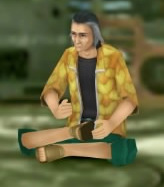 A master of Triple Triad, she controls regional rules and is part of a sidequest to obtain rare cards. Her real name is unknown. 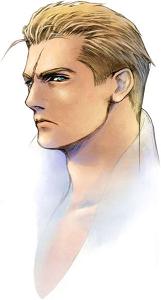 One of Balamb Garden's top students, and Squall's rival. Though he is just as competent as Squall and respects him, he lacks the detachment necessary for a soldier and frequently disobeys orders when his temperament flares up. In fact, he has many of the same personality traits and insecurities as Squall and they shared the same childhood; the difference between them being that Squall's defense against the world is reserve, indifference and cynicism while Seifer's defense is arrogance, outspokenness and romanticism. Though he is outgoing and honest, his single-minded pursuit of his dreams leads to him failing the SeeD examination, and further disasters. 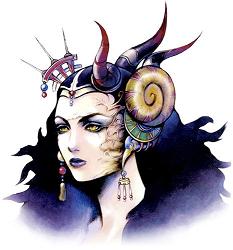 "You must fight to the end! Even though it may bring tragedy to others!"

A vain and power-hungry Sorceress who uses her brainwashing magic to seize control of Galbadia. SeeD is assigned the task of assassinating her. 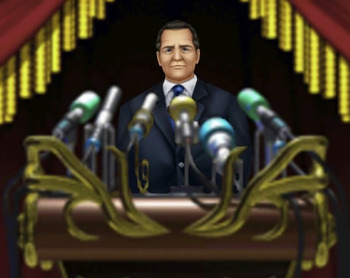 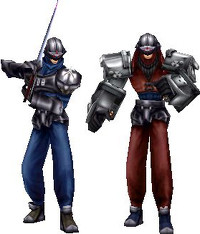 "I was demoted because of you! I'm only a lieutenant now! I'll get my revenge!"

Two Galbadian soldiers who encounter Squall again and again, each time leaving with both their pride and career prospects severely damaged.

For tropes about them in the other games see Final Fantasy Recurring Characters. 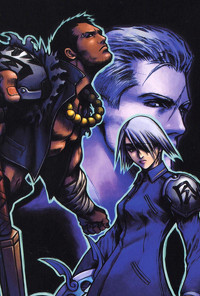 Seifer's partners and only friends. Raijin often slurs his speech and ends his sentences with "y'know", while Fujin speaks in monotone. Along with Seifer, they make up the self-proclaimed Balamb Garden Disciplinary Committee. 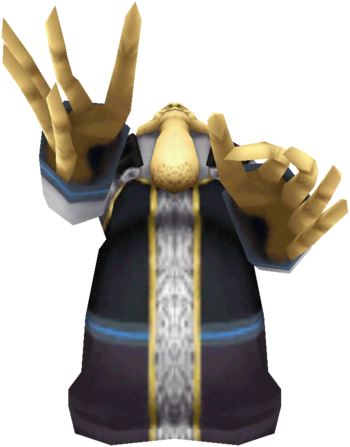 "THIS IS MY GARDEN!"
The true ruler of Balamb Garden.
Sorceress Adel 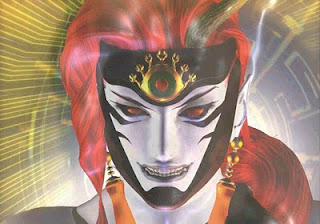 An evil Sorceress who once used her powers to rule Esthar with an iron fist. 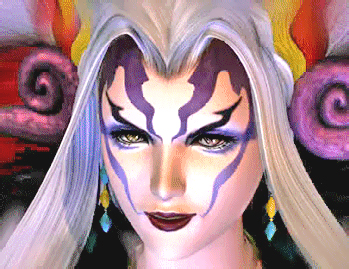 "This is reality. No-one can help you."
Voiced by: Atsuko Tanaka (Japanese), Tasia Valenza (English)

Ultimecia is an evil, all-powerful Sorceress from the future. She seeks to cast the almighty Time Compression magic, which would combine the worlds of the past, present and future into a single point and enable her to rule over all of time itself. 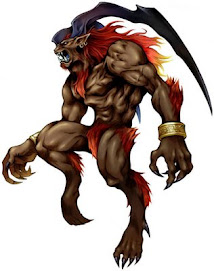 The first Guardian Force you have to fight (he's also the first boss of the game, period). Squall and Quistis must fight him in the Fire Cavern as part of a SeeD exercise. 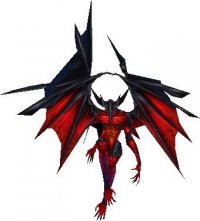 A devil Guardian Force that controls gravity. You can fight him at any time after Cid gives you the Magical Lamp.

The Brothers (Sacred and Minotaur) 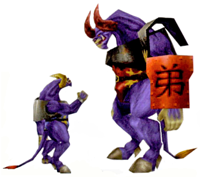 A pair of minotaurs fought in the Tomb of the Forgotten King. 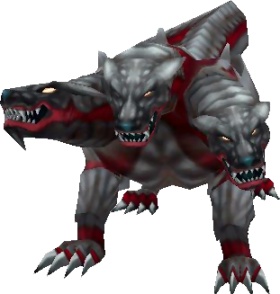 A cerberus Guardian Force you can fight in Galbadia Garden when you invade it at the end of Disc 2. 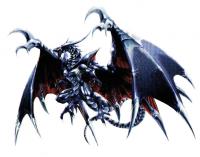 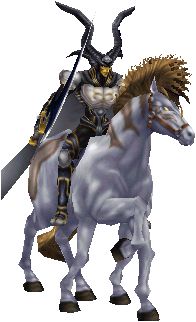 An optional, unjunctionable Guardian Force encountered in the Centra Ruins. After you obtain him, he can sometimes show up right at the beginning of a fight to One-Hit Kill your enemies before anybody has a chance to do anything. 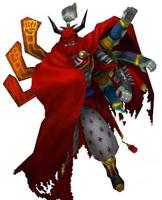 An optional, unjunctionable Guardian Force you automatically obtain at the end of Disc 3 if you have recruited Odin. He's obviously a reference to the Final Fantasy V character, if not the same guy.