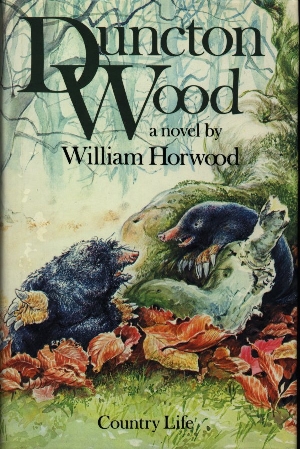 Duncton Wood is a novel by William Horwood about moles that live in the English countryside - specifically, the fictional Duncton Wood in Oxfordshire. The moles revere and worship monoliths and standing stones, and, as such, many mole communities are founded around them.

Of course, that's not all.

The story focuses less on epic tales of the mole lands and more on the love story of two moles, Bracken and Rebecca, daughter of the tyrannical Mandrake. The first book follows them from life to death, as well as the highs and lows that the Duncton System go through in the meantime.

Almost a decade later, the author wrote two sequels to the original novel, focusing on the son of the original protagonists. These books, Duncton Quest and Duncton Found, round out the first trilogy, called the Duncton Chronicles.

Two years after the publication of Duncton Found, Horwood wrote another sequel, entitled Duncton Tales, set around a century after the original books. This, in turn, led to another trilogy, called the Book of Silence.

Basically, think a more anthropomorphic Watership Down, but with moles and even more Nightmare Fuel.