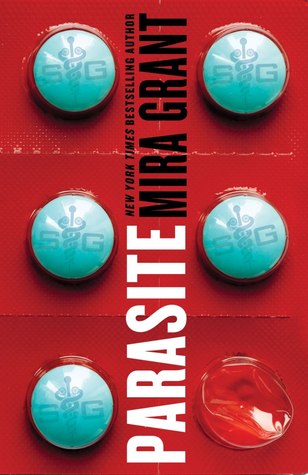 Healthcare Made Simple! Or not so much...
Advertisement:

Parasitology is a medical thriller series by Mira Grant, (aka Seanan McGuire).

It is 2027. The hygiene hypothesis — the idea that we have scrubbed our environment so much that we can't handle incursions by germs and parasites — has found a solution. SymboGen, the mega corp, has come up with a pill that contains the egg of a genetically engineered tapeworm called the Intestinal Bodyguard which regulates the body. Diabetic? The Intestinal Bodyguard will make sure you have enough insulin to never worry. Live in a third world country with no women's rights? The Intestinal Bodyguard will emit hormonal birth control. It's healthcare made simple. One pill, every two years — never get sick, never have to remember to take meds for your issues.

The story follows Sal Mitchell, who — six years before the narrative begins — had a seizure behind the wheel of her car, resulting in a car accident that left her gravely injured and in a coma from which no one expected her to wake. As her family discussed whether to unplug her life support, Sal awoke. The family was thrilled to have Sal back. SymboGen was delighted to take the credit and foot the bills for Sal's rehabilitative therapy (so they could study her). Sal, for her part, wasn't sure how to feel about any of this, as she couldn't even remember how to speak.

Things take a sharp turn into the weird and terrifying as people begin coming down with a strange sickness. Most people call it sleeping sickness — but it looks frighteningly similar to becoming a zombie.

Sal and her boyfriend Nathan begin to wonder what's going on, and whether SymboGen has been entirely honest about their product.

The series consists of Parasite, Symbiont, and Chimera.