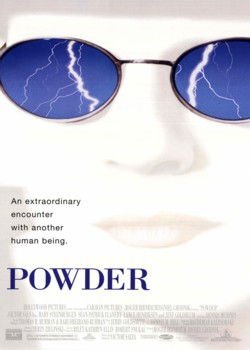 Powder is a 1995 film starring Sean Patrick Flanery as Jeremy "Powder" Reed — a blindingly white, bald albino boy born with supernatural, electricity-based powers. Powder's mother, having been struck by lightning, suffered Death by Childbirth and his father disowned him upon seeing his odd appearance, so his grandparents cared for him instead, though keeping him in the basement with nothing but books for solace. CPS agents take Powder from his home and to bring Powder into the outside world after his grandfather is discovered dead.

This film was directed by Victor Salva, who had been convicted in 1988 of having molested a 12-year-old child actor. Salva's victim would eventually come forward to encourage people to boycott the film, a possible reason for its disappointing box office revenues (US$31 million) The controversy and low return is probably why Disney—owner of the film's release label Hollywood Pictures—has never re-hired Salva since.

Not to be confused with the Roguelike game of the same name, originally developed for Game Boy Advance.