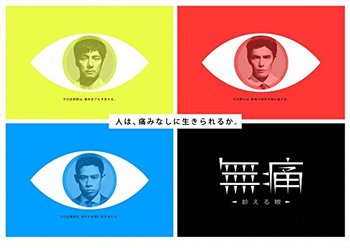 Can a person live without pain?
Advertisement:

Painless (無痛～診える眼～) note Mutsu ~Mieru Me~ — literally "Painless - Diagnostic Eyes" is a Japanese mystery/medical drama series that aired in 2015. The story is based off Yō Kusakabe's novel of the same name.

Eisuke Tameyori (Hidetoshi Nishijima) is a doctor running a small clinic. He has a very useful ability — to diagnose a person's sickness at a single glance. This ability also makes him capable of perceiving when a person plans to commit murder; a sign he calls "marker of criminal intent." In spite of his capabilities, he chooses to live a quiet life with his sister-in-law Kazue Inoue. After an encounter with a violent criminal, his ability is brought to the attention of Detective Junichiro Hayase (Atsushi Itō), a police officer with a passion for justice. Detective Hayase convinces Eisuke to use his abilities to help him solve crimes.

Meanwhile, Yōji Shiragami (Hideaki Itō), the founder and director of Shiragami Medical Center, is also a doctor with the same abilities as Eisuke. Within his hospital are two peculiar residents: Tadateru Ibara (Aoi Nakamura), a janitor with congenital insensitivity to pain; and Satomi Minami (Minami Hamabe), a mentally troubled patient who refuses to speak and only communicates by texting her caretaker, clinical psychiatrist Namiko Takashima (Anna Ishibashi). Doctor Shiragami envisions a world without pain and devotes his time and effort to researching "painless treatment" with the aid of Ibara's inability to feel pain. He later meets Eisuke and, seeing a kindred spirit, asks for assistance with his research.

Aside from the usual crimes he deals with as a detective, Hayase's thirst for justice is constantly reinvigorated whenever he recalls an unsolved serial-killing case wherein a family of four was brutally murdered with a hammer. Under Namiko's care, Satomi draws an eerily accurate portrait of the murders, and sends her a text: "I killed these people."