Literature / Valley of the Dolls 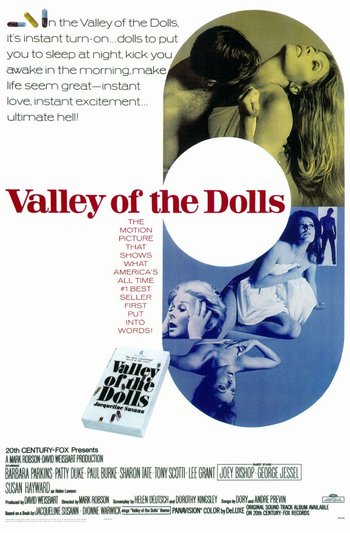 "When you're climbing Mount Everest, nothing is easy. You just take one step at a time, never look back and always keep your eyes glued to the top."
Advertisement:

Valley of the Dolls is a 1966 novel by Jacqueline Susann.

It follows the lives of three women — Anne Welles, Neely O'Hara, and Jennifer North — from the late 1940s to the mid 1960s. They start out as roommates in New York, and each of them achieves fame and fortune in the cutthroat world of show business, with plenty of ups and downs along the way, particularly where their love lives are concerned. While one might think "Dolls" refers to these leading ladies, it is a slang term for pills — particularly sleeping pills and weight loss pills — and almost everyone in the book pops them like candy...note The term "dolls" may come from dolophine, a form of methadone also used as a painkiller and sleep aid, and very addictive.

The novel was wildly popular upon publication (thanks largely to its juicy Horrible Hollywood detailing), and had two film adaptations. The first, made in 1967, was directed by Mark Robson and starred Barbara Parkins, Patty Duke, Sharon Tate, Lee Grant, Paul Burke, Martin Milner, and Susan Hayward. Just like its source material, it was hated by critics yet a huge box-office hit; today it's seen as a So Bad, It's Good Cult Classic. The second adaptation was a Made-for-TV Movie in 1981. The first adaptation also had a 1970 parody pseudo-sequel, Beyond the Valley of the Dolls, screenwritten by Roger Ebert and directed by famed schlockmeister Russ Meyer.

Alternative Title(s): Valley Of The Dolls