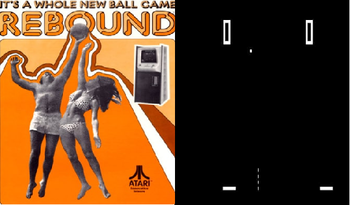 Cover on the left, gameplay on the right.
Rebound is an early Arcade Game from Atari, released in 1974 at the height of the Pong craze. It's a Side View volleyball game, basically a side view version of Pong with volleyball rules and gravity affecting the ball. Each paddle can hit the ball up to three times before sending it back over the net.
Advertisement:

Whether Atari knew it or not, using side view made it a remake of Tennis for Two, and the vertical gameplay is a preview of Breakout.