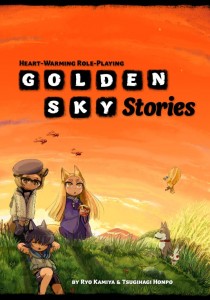 Golden Sky Stories (Japanese: Yuuyake Koyakenote literal English translation: "Sunset") is a heartwarming, non-violent Tabletop RPG from Ryo Kamiya and Tsugihagi Honpo. It is translated by Ewen Cluney. If this does not ring a bell, Ryo Kamiya is the one who brought us much weirdness in the form of Maid RPG and Nechronica.

While Golden Sky Stories has its own share of strangeness, compared to the above works, it is much more tame in comparison. (In fact, it is recommended for ages 10 and up.)

The players take on the roles of henge (pronounced: hen-gay), magical animals who live in a small Japanese town, helping the local residents solve their everyday problems. There is no over-arching quest to save the world and usually no fighting or anything that could be traditionally called a villain.

That does not mean that the stories get boring. On the contrary, the honesty of the small everyday occurrences will touch your heart and reinvigorate your spirit.

It is pretty much Iyashikei in RPG form.

It has four English supplements: The Colors of the Sky, featuring additional character types, scenarios, stories, and more, combining translated Japanese GSS material not collected elsewhere with original English material; Faerie Skies, an alternate setting where you play fae in a small English town; Fantasy Friends, an alternate setting where you play Lighter and Softer versions of Dungeons & Dragons monsters in a fantasy town; and Twilight Tales, a translation of the Japanese Mononoke Koyake, which introduces playable mononokenote wholly magical beings. It also has two untranslated Japanese supplements, which further expand the available player options, with elder henge, and humans respectively.