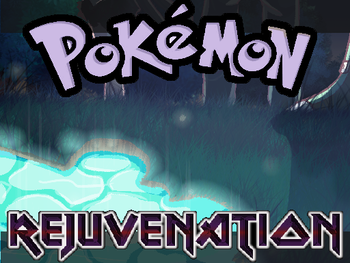 The game takes place in the Aevium region, which was split into several islands after some catastrophic event in the past. The protagonist and his/her/their mother, Nancy, are in the process of arriving there on the S.S. Oceana when it gets attacked by the local villainous team, Team Xen. Despite the ship being destroyed and the protagonist's mother being captured, the protagonist manages to escape thanks to the fire-type Elite 8 member, Tesla. With her help, they arrive in Eastern Gearen City on the mainland of Aevium, ready to battle the Pokemon League, defeat Team Xen, and hopefully rescue their mother in the process.

Like its inspiration, Pokemon Reborn, Pokemon Rejuvenation has a story that's more mature than the main Pokemon games, albeit not as dark as Pokemon Reborn's story (for the most part, anyway). It's also very, very difficult, arguably even more so than its inspiration. The game borrows Pokemon Reborn's ideas of a field effect system, 18 Gym Leaders, and a level cap, but also adds an Elite 8 instead of the traditional Elite 4, as well as new, unique moves for every gym leader. In addition, the game brings back Shadow Pokemon from Pokémon Colosseum and Pokémon XD (although they get a Nerf, with their attacks being not very effective against Fairy-type Pokemon).

For clarity, updates to the game are called "Versions", but the story of the game itself is broken up into "Chapters" which usually end with fighting a Gym Leader. Each Version roughly corresponds to one Chapter, but not quite. The latest update available is Version 13, which contains Chapters 1-15. When referring to specific points in the story while adding examples, please say which Chapters it happens in, rather than the Version as not everyone knows where each Version began and ended.

The game, and the supplementary spin-off game Where Love Lies, can be downloaded on its own official subforum of the Pokémon Reborn forums here