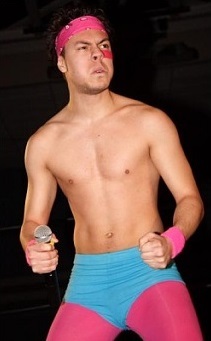 The King of Crazy

Adam Ortega is an American Professional Wrestler from New York City as Pinkie Sanchez. He debuted in 2004 and has wrestled for CHIKARA, CZW, Dragon Gate USA and numerous other promotions. He debuted in CHIKARA in 2008. In 2009, Carpenter Ant, a character originating in the promotion's Comic Books, started appearing. He even won that year's Torneo Cibernetico with the Inverted CHIKARA Special, a hold Mike Quackenbush had supposedly taught only to Tim Donst. At the 2009 Season Finale Three-Fisted Tales on November 22nd, Carpenter Ant took part in the riot that marked Die Bruderschaft des Kreuzes' debut, and subsequently unmasked as Pinkie.

Among his in-ring achievements, he is the inaugural and 2x ISW King of Crazy Champion

and is the PWM Champion

"The King of Crazy Tropes":